BEIJING - China has taken a leading role in utilizing many green technologies and is expected to be a major market for carbon capture and storage technologies, said industry leaders.

Both research institutes and companies have shown great enthusiasm for the technology, but commercialization will take time due to high costs and safety issues, said analysts.

"Carbon capture and storage (CCS) is a tough issue but there's an opportunity. If it can make sense in any place, China can take the leadership," Christoph Frei, secretary-general of World Energy Council, told China Daily.

China has outperformed in many aspects of renewable energies and pulled down the price of new energy, particularly in the solar energy sector, Frei said. 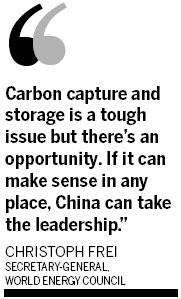 A pilot program may be announced in the next two years on a partnership with local Chinese utilities, said Philippe Paelinck, director of carbon dioxide systems business development at Alstom.

The components of its future CCS projects in China, such as boilers, will be locally produced in China to cater to local conditions and lower cost, he said.

Some State-owned enterprises, such as Shenhua Energy Co and China Huaneng Group, have started CCS pilot projects in cities including Beijing and Shanghai.

"Both companies and research institutes are enthusiastically involved in CCS," said Chen Wenying, a professor at Tsinghua University.

All three major CCS technologies, post-combustion capture, oxy-firing and pre-combustion, plus some more advanced technologies, are in their experimental stages at Tsinghua.

"China is not lagging behind in some core technologies, but compared with international peers, little effort has been made on storage site studies and crisis management," Chen said.

China may levy a carbon tax during the 12th Five-Year Plan (2011-15), which may encourage coal-fired power plants to adopt new technologies such as CCS to mitigate carbon emissions, analysts said.

Special Coverage:Reforming our mode of growth

The tax would be as high as several dollars per ton, but it costs at least $30 per ton to capture carbon dioxide based on current technologies, without calculating transportation and storage costs.

It's also a problem how to apply the technology in a power plant which generates millions of tons of carbon dioxide annually, she said. Storing the carbon dioxide will become as very big challenge as volumes become larger, said analysts.

The risk exists that the carbon dioxide could leak back into the atmosphere exist, said Liu Shuang, climate and energy project director of Greenpeace China.

However, China is very likely to need CCS in the next 20 or 40 years to address climate change, as the scale of the renewable energies would be limited, so China should catch up in the initial period, Chen said.