BEIJING: European aircraft manufacturing giant Airbus said it is aiming to sell five corporate jets in China annually over the next few years as the country has become the world's fastest growing market for private jets thanks to the rise of the ultra-wealthy in the country. 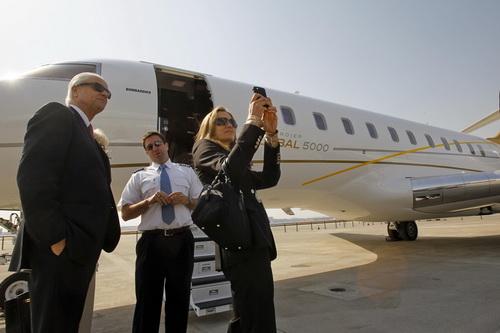 Foreigners visit the business jet base at Shanghai Hongqiao Airport. China's private jet market is expected to witness the world's fastest annual growth rate of 15.6 percent from 2009 to 2018. [Zhang Dong / For China Daily]

"Our traditional strong market has been the Middle East. But we definitely see China catching up in the very near future. We want to capture half of the China market," said Francois Chazelle, vice-president of Airbus for executive and private aviation.

Chazelle made the remarks on the eve of the Hainan Rendez-vous 2010, a luxury lifestyle show combining private jets, yachts and luxury real estate. Airbus will display a corporate jet during the show that runs between April 2 and 4 in Sanya, Hainan province.

Zhang said the most eye-catching trend in China in recent years has been the increase in private customers. Business jets have three types of customers: government authorities, charter operators and private customers who are usually heads of large companies.

Private customers usually buy business jets and ask a company to manage the jets by providing pilots and services such as maintenance, onboard services and ground handling.

Despite a slowdown in the use of private jets in the United States and Europe last year due to the economic crisis, the flight hours of business jets in China rose 40 percent year-on-year in 2009 and this figure is expected to surge 60 percent this year, Zhang said.

China's private jet market is expected to witness the world's fastest annual growth rate of 15.6 percent from 2009 to 2018, according to a report issued by Canadian aircraft maker Bombardier.

Currently about 30 private jets are registered on the mainland, compared with over 10,000 in the US, according to figures from Deer Jet.

China's strict air space regulation, high import duties and the lack of infrastructure for business aviation have been named as major obstacles for the growth of corporate jet market.

Deer Jet, which is also a subsidiary of China's fourth-largest airline company HNA Group, said on Thursday that it will become the first Chinese operator to dedicate an Airbus Corporate Jetliner (ACJ) for charter flights later this year. ACJ, with a list price of $75 million, is based on the airframe of the A319, a single-aisle, medium-range airliner. It can offer nonstop charter flights throughout China and most of the Asia-Pacific.

Airbus has sold 20 corporate jets to the Greater China region, three of which are operated and registered on the mainland.