Getting a grip on property ladder

Getting a grip on property ladder 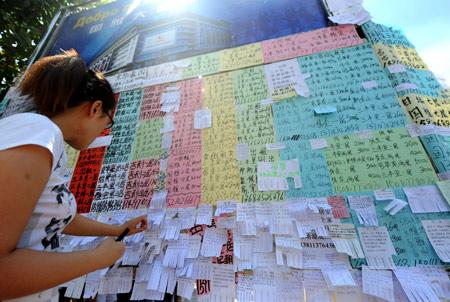 A woman examines the latest property offers on a bulletin board on Yabaolu Street in Beijing in this file photo taken in early July. [China Daily]

With sky-high property prices being the norm across China, many city dwellers are fueling rampant rental markets as they shelve their dreams of starting on the property ladder.

The housing price-to-income ratio for urban residents is expected to reach 8.3 and the figure for migrant workers will be as high as 22.08, according to the 2010 Blue Book of China's Economy released by the Chinese Academy of Social Sciences at the end of 2009.

That means millions are forced to rent, the rising costs of which can prove frustrating.

In Beijing, the average price of renting an apartment reached 2,889 yuan (US$432) in August, more than 3 percent higher than in July and a 15-percent year-on-year increase, according to figures released by the real estate agency, 5i5j.

Many tenants find that rents rise dramatically when they attempt to renew their leases, a result of high demand and insufficient supply.

Along with the large number of graduates flocking to cities for work, tens of millions of low-income farming families arrive every year, with most pushed to suburban areas where they form new "village communities".

Even those who can afford rising rents say the lack of protection for tenants' rights means they live in fear of being ejected by landlords with little notice.

China Daily talked to a group of typical tenants -- an elderly widow, a graduate, a young couple and a young professional -- to discover the difficulties they face in today's property market.

Lu Chao and her husband Guo Benliang have already lived in three districts of Beijing since 2006 -- each apartment only fractionally better than the last.

The latest move, which saw them rent a 10-square-meter room in a suburb close to the capital's Nanyuan airport, was prompted by the arrival of their daughter, who is now 5 months old.

Before returning from their hometown in Shandong Province last month, the couple had lived in a basement in Muxiyuan area, part of Fengtai district, and a first-floor room near the 798 art zone.

Guo pays 300 yuan (US$45) a month for their new place in Fengtai, which is only a fraction of the 24-year-old's salary from working at a nearby kitchen utensils factory. However, conditions are poor.

"It would be OK if we didn't have a baby but we do," complained Lu, 23, who is a full-time housewife. "There is no place to dry our baby's clothes under the sun and no place to take her out. "We will not live here for a long time. The poor environmental hygiene is a threat to my baby's health."

The family lives in one of 61 rooms on the second floor of a two-story residential building, where the only toilet is the public facilities next door. Each morning, tenants fight for space in the washroom as only five of the eight faucets work.

Lu said that at first she was embarrassed at constantly seeing men walking around in their underwear as they traveled to and from the washroom, "but I quickly got used to it".

And in the evening, families fill the 1.2-meter-wide corridor with small cookers to make dinner, which fills the building with an almost unbearable smell.

"I can smell it even in our room," said the new mother. "Sometimes people cook spicy food that are really pungent."

Luckily for the family, they will soon move into a nicer property within the capital's Second Ring Road, which is being provided free by Guo's boss. And it cannot come soon enough -- Guo said he has already paid 1,000 yuan for medicine for the baby after conditions in the building made her ill.

"I want my child to study in a Beijing school, so I hope we can settle here," he said. "But who knows? Maybe we will go back to Shandong to till our farmland in a couple of years."

Housing prices close to their current home are as high as 14,000 yuan per square meter, said Guo, who added: "I guess eventually we may only be able to buy a house in our hometown."