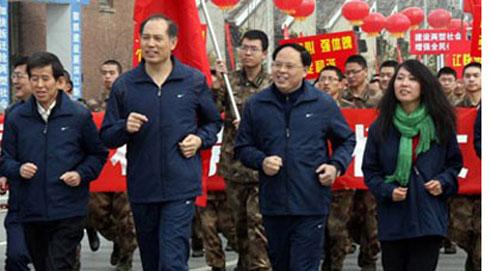 Changsha, Zhuzhou and Xiangtan held the First Changsha-Zhuzhou-Xiangtan Round-city Race on March 26 to build up its momentum in bidding for the 13th National Games. In Changsha, Olympic champions Wang Junxia, Gong Zhichao and Yangxia and Vice Governor of Hunan Province Guo Kailang took the lead in the race.

Changsha road race in spring which has been held on 44 occasions is a traditional event of the city. It becomes part of the splendid view of national physical fitness campaign.

According to Li Shun, director of Hunan Provincial Bureau of Sports, the round-city race not only arouses citizens' enthusiasm about physical fitness, but also displays Hunan People's zeal for bidding for the 13th National Games.

The Games will be held in 2017 on schedule. Hunan, Tianjin, Shaanxi, Sichuan and Hubei provinces have submitted the bid report, preparing for presentations in early-and-mid April, when the hosting place will be determined by voting.