A total of 25,900 LEDs light up the architecturally harmonious building structure, thus contributing to the attractive contemporary look of the Siemens site.

The Siemens Building Technologies Division, which is the largest employer in the Zug region and a leading technology company, illuminated the facade of its new parking garage and staff restaurant at its headquarters in Zug with a total of 25,900 LEDs produced by the Osram joint venture Traxon. In order to ensure that this building is not only an eye-catcher architecturally, but also at night, Siemens invested an additional six-figure sum. This LED lighting, the dimensions of which are entirely unique in Switzerland, can be seen as a contribution by Siemens to Zug's contemporary and progressive image as a city. 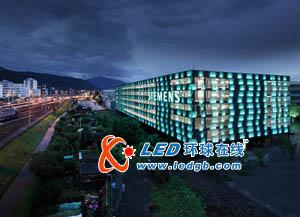 A total of 25,900 LEDs light up the architecturally harmonious building structure, thus contributing to the attractive contemporary look of the Siemens site.

The parking garage opened on June 1st and the staff restaurant five moods on the ground floor is opening its doors on July 26th. In August construction of three new buildings will begin on the site of the old staff restaurant and the existing parking spaces. With this new structure, Siemens is implementing the development plan created together with the municipal and regional authorities of Zug.

Energy efficiency due to LED lights

The lighting concept includes 1,230 LED lights of the type Liner XB from Traxon, which can generate an entire range of colors using the three primary colors red, green and blue. The Liner XBs are equipped with high-power LEDs and thus achieve high light output. The asymmetrical optics of the LEDs allow for uniform and intense illumination, which can be controlled flexibly in terms of both color and intensity. The energy efficient LED lights help keep the operating costs of the facade lighting to a minimum: The power requirement for the light installation is only 39.2 kW per hour of operation, which is roughly equivalent to the power consumption of 20 electric kettles. In addition to four standard sizes, special lengths of the Liner XB lights were developed especially for use in the parking garage in Zug. The entire light installation is controlled using the Lighting Application Suite software, which runs on an LCS1 lighting control server made by e:cue lighting control. In addition to this four Butler XT DMX controllers, which are also made by e:cue, are to be used to flexibly control the lighting effects.

The facade lighting is currently operated statically i.e. without color changes and lighting effects However, Building Technologies is working closely with municipal authorities to develop an overall lighting concept for the city of Zug to enable dynamic operations today and in the future.

Eye-catching even without lighting

The new parking garage is located at the northern end of the Dammstra?e and it defines Theilerplatz in combination with the planned new Building Technologies headquarters and the existing superstructure. The facade's design clearly reflects the buildings significance as a structure that defines the space and adds to the overall design of the square. The building's outer skin consists of expanded metal mesh fields in two tones of silver as well as dark gray horizontal pilaster strips column-like wall elements which combine to form a delicate, slightly transparent, sectioned facade. The expanded metal mesh construction also allows for natural energy-efficient ventilation of the parking garage.

In addition to the LED facade lighting, numerous Siemens products and solutions are used in both the parking garage and the staff restaurant including exhaust fume monitoring, the fire alarm system, transformer stations, switch cabinets for the main and sub-distribution boards as well as measurement and control technology. In the future, the lighting installation is to be connected directly to the building management system.