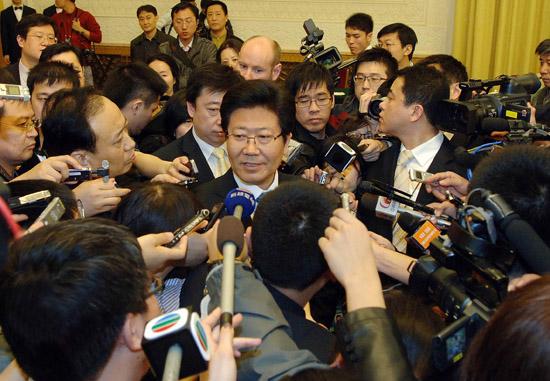 A reporter asked Zhang about his greatest impression on Xinjiang after he came into power.

"First, I feel excited about the large area of XJ. Second, XJ has beautiful scenery, some are completely different from inland provinces. Third, the region has multi-culture and industrious and hospitable people. Fourth, XJ bears great potential. It has abundant resources and borders on eight foreign countries. I believe it will play a significant role in the development of China's well-off society. Last is hard work. I work for over ten hours every day after arriving there. "

During the two sessions, Zhang Chunxian opened his microblog to learn to people' s opinion. This becomes a focus in the interview.

"It's impolite to ignore netizens' questions. Now I have over 5300 pieces of massage, and the audiences numbered over 80,000 till this morning. I read most of them, except the ones left in early this morning. I think it's a good way to communicate with people through the microblog in the two sessions."
Some journalists asked the changes Xinjiang will take after 5 years.

"Xinjiang will have a more honest government. The economy is full of vigorous, people live in harmony and society will be in rapid progress."

In the 40-minute interview, Zhang Chunxian answered journalists' questions patiently. At last, Zhang Chunxian said that, the media at home and abroad play a proactive role in promoting Xinjiang's social and economic development. He sincerely invited journalists to visit Xinjiang and publicize the region, aiming to join hands to build a more prosperous Xinjiang.