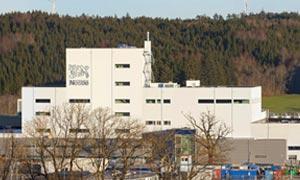 As an extension of the Company s 106 year old Biessenhofen factory site, the Nestl Nutrition infant formula factory is one of the world s largest and most modern facilities producing hypoallergenic or allergy risk reducing infant formula.

The new 23,000 square-metre factory now doubles its production of Nestl HA infant formula under brands such as Nestl Alete and Nestl Beba.

The site also includes thermal insulation and a new cooling system to promote efficient use of energy and water illustrating Nestl s commitment to environmental sustainability.

Nestl recommends breastfeeding as breast milk is the most nutritionally sound first food for babies, helping to protect them from allergies. But for babies who cannot be breast-fed, Nestl HA infant formula is a clinically proven way to significantly reduce the risk of developing allergic reactions.

In partnership with the Nestl Research Center in Lausanne, the Product and Technology Centre (PTC) in Konolfingen, the HA production centre in Biessenhofen, and other external collaborations; HA infant formula has been produced at the Biessenhofen factory site since 1987.

Speaking at a press conference to commemorate the opening, Mr Bauer emphasised Nestl s lead in innovation and said: We celebrate not only the factory opening, but also the 25th year in the fight against the risk of allergy in non-breastfed infants by Nestl 's hypoallergenic infant formula.

He added: Biessenhofen has a special place in our history, as well as in our research and development. Right from the beginning, since 1905, Biessenhofen was responsible for manufacturing nutritional products.

Nestl recommends breastfeeding as breast milk is the most nutritionally sound first food for babies, helping to protect them from allergies. But for babies who cannot be breast-fed, Nestl HA infant formula is a clinically proven way to significantly reduce the risk of developing allergic reactions.

Driven by Nestl s Research and Development, HA infant formula is based on 100% whey protein which is hydrolyzed or broken down to reduce the allergenicity of protein found in cow s milk.

In only moderately breaking down the allergenicity of the protein, Nestl HA infant formula simultaneously allows to gently introduce a so-called oral tolerance to food allergies and provides a pleasant taste for babies. 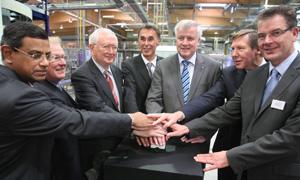 He said: We can meet growing consumer demand for products with tangible health benefits in over 80 countries across the world; while playing a vital role converting our innovative research into state-of-the-art production, and giving Nestl Nutrition a competitive advantage in the market-place.

Biessenhofen also plays an important part in our overall mission of applying science-based nutrition to meet consumer needs and helping them live longer and healthier, while contributing to the significant role we play at Nestl Nutrition in terms of Nestl s overall Nutrition, Health and Wellness mission.

The Biessenhofen factory site one of three Nestl factories worldwide that produces HA infant formula also produces products such as infant cereals, infant specialties, healthcare products for adults under the brands Alete, Sinlac, or Clinutren, but also products like Thomy and Nescaf Xpress. The factory site exports to over 80 countries and employs around 640 people.