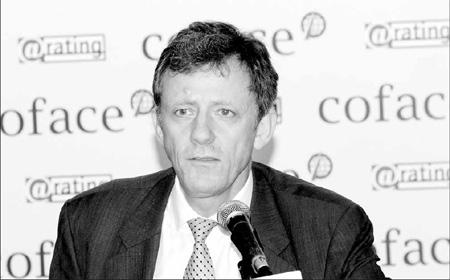 Editor's Note: Coface, an international credit insurance and credit management services group, in February downgraded its ratings for 22 countries and territories, while putting the two biggest emerging markets - China and Russia - on its negative watch list of A-3 ratings for the first time.

However, with the more positive economic outlook for China, Coface has since kept China's country rating unchanged, despite almost all other countries having had one or two downgrades since the beginning of the global financial crisis.

In 2003, Coface partnered with Ping An Insurance to offer domestic short-term trade credit insurance to help Chinese enterprises and foreign investment companies mitigate credit risks in domestic trade in China - the first such service in the country.

Burton believes that China has made great advances in regulations and opening its markets since becoming a member of the World Trade Organization. But the current crisis has highlighted certain weaknesses such as an over-reliance on exports and lower value-added manufacturing that are now being addressed.

Q: Coface once estimated that the credit crisis triggered by the global financial crisis might see the bottom by the end of 2009. What is your latest observation on the credit crisis? Coface also once said that among Asia's emerging countries, China might be the first to show signs of recovery. Why?

A: According to Coface's latest scenario, the global recession is expected to end in the third quarter of 2009, and the scenario of a weak and slow "L-shaped" recovery remains the most likely.

An inclined L-shaped recovery rests on three types of positive signals. First, some real economy indicators are improving such as retail sales, property and job losses in the United States, and industrial production in some European markets.

Plus, anticipation surveys of investors and consumers are pointing up. Third, financial players are showing a renewed appetite for risk. Our inclined L-shaped scenario is nonetheless dependent on confidence, which is still weak.

Coface projects the 2009 recession at -2.5 percent and sees growth recovering in 2010, settling at 1.7 percent. After having downgraded 22 countries in January and then 47 in April, Coface downgraded 13 country ratings again in July, primarily for small or medium-size economies highly dependent on international trade.

Since the beginning of the crisis, most countries have been implementing measures and stimulus packages to prevent this from worsening. From the latest economic indicators, it can be seen that the contraction has been slowing down.

China has been able to withstand the current downturn with its large reserves through announcing a large fiscal stimulus plan and the loosening of its monetary policy. Compared with other Asian economies, China's growth performance is relatively strong.

Q: According to Coface's country risk rating system, what is the current status of China in the global economy? Is there anything that the country needs to do to sustain its economic recovery?

A: Signs of recovery in China were perceptible in the first quarter of 2009, thanks to strong economic stimulus measures taken late in 2008.

On a quarter-on-quarter basis corrected for seasonal variations, the consensus estimate is that growth reached 6 percent in the first quarter of 2009 - up from 2 percent in the fourth quarter of 2008. Growth in the second quarter has reached 7.9 percent, and most analysts now believe that 8 percent growth for 2009 is in the bag.

Thus, China is still at the top when it comes to growth and will remain there for some time to come. We think that the measures to boost domestic demand, to re-orient the economy away from export manufacturing, the focus on infrastructure building and cleaner energy will all reinforce China's economic power and development.

The stock market reflects some of this confidence. But there is a need to address weaknesses in the banking system. If Chinese SMEs (small and medium-sized enterprises) are to continue to grow and are to continue to contribute a greater and greater share of the GDP, then banks will have to learn to lend to them.

Equally fundamental planks in a market-driven economy such as transparency of information, for example, will have to develop. We undertake an annual payment survey of Chinese companies, and systematically the reasons for not giving credit are that private companies are perceived as risky - because they have a lack of financing, because banks don't lend, because there is a lack of information and a credit culture.

Q: How do you evaluate Chinese enterprises' general credit level?

A: Coface China has been conducting a survey of corporate credit management practices of Chinese enterprises and their payment experience in domestic trade since 2005.

It has been observed that Chinese companies are increasingly aware of the benefits of good corporate credit management. However, there are still many small and relatively new private companies that do not maintain credit management control, and their default payment risk is much higher.

Those trading with companies exporting to US and European markets are consequently impacted due to the market contraction in these markets in the financial crisis.

On the other hand, we also see companies are more willing to invest in good credit management practices and expertise, as this will translate to better performance and margins.

Q: Which industrial sectors are demonstrating signs of higher or lower risk as a result of the current recession?

A: Generally speaking, China's infrastructure, medical/pharmaceutical and information technology are considered low-risk sectors, while the low value-added sectors that include toys, textiles and furniture are high-risk sectors. There is concern also for those industries with excess capacities such as steel, textiles and electronics.

Globally, some economic sectors show heightened risks, while others show signs of stabilization - but rare are those unscathed by the crisis.

Therefore, Coface downgraded eight sectors in April: automotive (C+ to C-), mechanical (B+ to B-), steel (A- to B+), air transport (B- to C+), chemicals (A- to B+), textiles-clothing (C+ to C), electronic components (B+ to B), and telecommunications equipment manufacturers (B+ to B).

In summary, sectors where risk continues to increase or is beginning to do so include automotive, mechanical, air transport and steel sectors.

Sectors with a consolidation process under way, but where risk remains significant, are the paper industry, information and communications technologies, construction worldwide, and textiles and clothing.

Sectors where the risks are limited are pharmaceuticals, telecommunications operators, agri-food and mass distribution focused mainly on food.