BEIJING - Premier Wen Jiabao gave an assurance on Monday that Taiwan-funded businesses on the mainland will not be marginalized by economic restructuring. 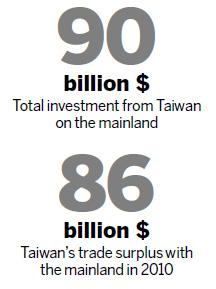 Wen told a news conference that the mainland's efforts to transform its economic development pattern will create a better investment environment and bring more favorable opportunities to Taiwan companies.

"They will enjoy greater potential for development," he said in response to a question about concerns in Taiwan that the mainland economy's shift to a more environment-friendly pattern could adversely affect some Taiwan-invested businesses that are mainly labor- and resource-intensive.

The mainland has become a major destination for Taiwan investment, with 9 percent of total overseas investment on the mainland coming from the island, he said.

At present, there are more than 80,000 Taiwan-invested businesses on the mainland, with total investment surpassing $90 billion.

Noting the existence of problems in the implementation of the agreement, Wen pledged to pursue follow-up negotiations.

The trade volume between the mainland and Taiwan exceeded $140 billion in 2010, with Taiwan's surplus reaching $86 billion, Wen said, adding that trade volume grew 30 percent in January.

"I anticipate Taiwan businesses will enjoy greater development on the mainland," he said.

Chiang Yung-Hsiung, owner of a Beijing-based Taiwan suitcase manufacturing company with more than 3,000 employees, told China Daily on Monday that he does not worry about the pressure caused by increased labor costs, saying the mainland long ago lost its advantage in that area.