The market was much steadier this week, when the AWEX Regional Indicators finished 0.9% higher, on average, at sales in Sydney, Melbourne and Fremantle and the US exchange rate was unchanged.

There was no sale on Wednesday due to the Australia Day holiday.

The US exchange rate was relatively unchanged this week, while the exchange rate against the Euro eased further from its previous high values. The Euro exchange rate rose sharply late last year when the Irish financial concerns and "bail out" became public and there were fears of similar occurrences in some other Euro currency countries.

It was more "subdued" market this week without the spectacular rises of the earlier January sales. But, the market remains very strong, recovering part of last Thursday's fall; and continues at the highest levels since the "boom" of the late 1980's.

The changes were more evenly spread over the different micron ranges this week, whereas the fine wools had the biggest gains earlier in the month.

Merino skirting types continued to be in good demand. Similarly, crossbreds were well sought after and experienced similar percentage changes in their average AWEX MPGs to those seen for Merino wools. Their average MPGs rose by 10% at the coarse end during January, increasing to 20% at the fine end. Oddments were a little mixed, with the average Merino Cardings Price Guide down by 0.7%. The average Merino Cardings Price Guide was up by 12.3% during January.

Buyers for China were again dominant, with continued good support from buyers for Europe, India and Taiwan.

Sales will be held in Sydney, Melbourne and Fremantle next week, when 45,557 bales are currently rostered for sale. Present estimates for the following two sales (Weeks 32 and 33) are 47,990 and 45,200 bales, respectively; a decrease of 5.4% over the three sale period when compared with last year. It is not yet clear what effect the floods in Eastern Australia will have on shearing and transport delays, and on offerings over the next few weeks.

In South African sales, the Cape Wools Indicator was up by 2.1% since last week against a 2.4% depreciation of the Rand against the US Dollar and a 4.2% depreciation against the Euro. 8,690 bales were on offer. 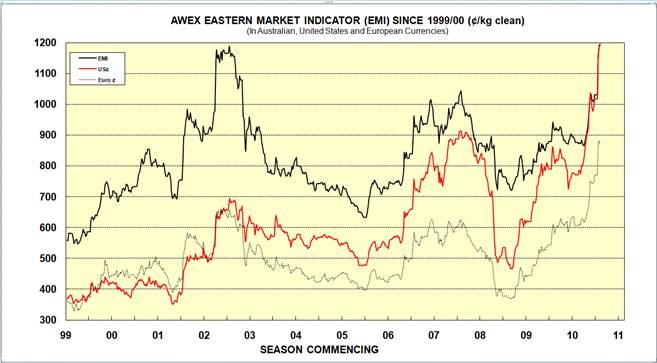