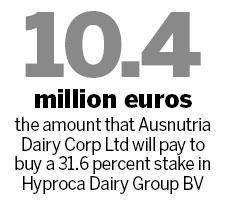 In a statement to the Hong Kong Stock Exchange on Wednesday night, Ausnutria said it will pay 10.4 million euros ($14.9 million) to buy a 31.6 percent stake in Hyproca Dairy from its holding company Dutch Dairy Investments BV (DDI).

Taking into account its existing stake acquired through shares subscription, the deal will give Ausnutria a 51 percent controlling stake in Hyproca Dairy.

Ausnutria said about 7.4 million of the 10.4 million euros will be paid in cash and the rest through an issuance of 11 million shares at 0.27 euros a share to DDI.

Hyproca Dairy is a major international producer of goat milk.

The company, founded in 1897, has facilities in research and development, milk collection, processing, production, packaging, marketing and sales.

According to the statement, Hyproca Dairy has recently finished the acquisition of assets from Lyempf BV, another Dutch dairy product maker, including a dairy plant for preprocessing raw milk and two spray dryers with capacity of 27,000 tons of powder.

Ausnutria's deal comes when Chinese dairy companies are fighting to win back credibility after a series of scandals in 2008, when milk laced with melamine, a chemical added to milk products to make the protein content seem richer, sickened nearly 300,000 children throughout the country.

In 2010, half of the 560,000 tons of infant milk bought by Chinese consumers was from foreign brands, according to data from China Dairy Industry Association.

"And after losing market share, domestic dairy companies are increasingly looking abroad for acquisitions or cooperation, in the hope of raising the quality and credibility of their products."

Ausnutria, whose profit dropped 39.5 percent to 110 million yuan in 2010, said in the statement that the deal is in line with its strategy to go upstream to reduce supply risk and ensure a stable supply of milk powder.

The deal is Bright Dairy's first investment in processing facilities outside China.