revaluation of the yuan the yuan
Home Facts china 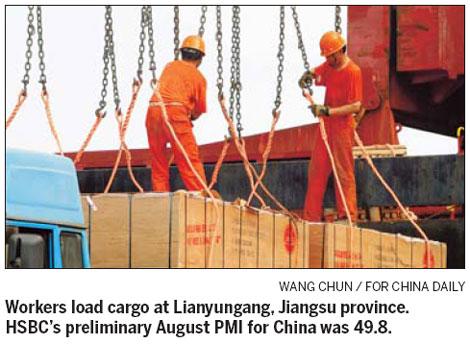 China's manufacturing may contract at a slower pace in August as the world's second-biggest economy weathers slumping global confidence.

A preliminary reading of 49.8 for a manufacturing index released by HSBC Holdings PLC and Markit Economics on Tuesday compares with a final reading of 49.3 for July. The final August number is due on Sept 1. A reading below 50 indicates a contraction.

The data suggests that growth in China is moderating rather than collapsing and the slide in the index in July may have been a one-off "blip", HSBC said. Investors are focused on the outlook for the nation as US growth falters and European officials grapple with a debt crisis that is yet to be resolved.

Faltering US and European growth and a deepening debt crisis in the eurozone have triggered a four-week rout that's wiped out more than $8 trillion in global equity values. China's commerce ministry cautioned on Tuesday that exporters face weak demand and rising costs.

"China is on track for a soft landing despite the external risks, with accelerating inland growth and investment in public housing and new projects," said Zhang Zhiwei, chief China economist at Nomura Holdings Inc in Hong Kong, before the announcement.

HSBC's preliminary index, known as the Flash PMI, is based on 85 to 90 percent of responses to a survey of executives at more than 400 companies.

The preliminary number has matched the final reading twice since HSBC began publishing the series in February. The final reading fell below 50 in July for the first time in a year. The official manufacturing index released by the national statistics bureau and the China Federation of Logistics and Purchasing had a reading of 50.7 in July.