Apple Finds Many Want to Take a Bite of its Business

Apple Finds Many Want to Take a Bite of its Business 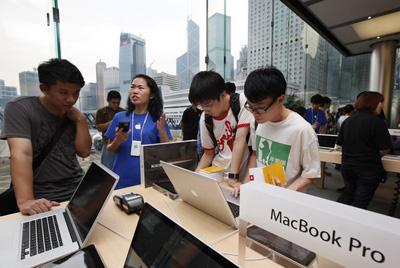 Customers at the new Apple Inc Store in Hong Kong's upscale International Financial Center Mall on Sept 24. Apple Inc has opened its long-awaited first store in Hong Kong, with hundreds of fans of the computer and gadget maker pouring in on the first day. [Photo: China Daily]

When Gao Xiangyu, a graduate student at Peking University, first heard of the new Apple experience center in the campus library, she thought it was just relating to the four Macintosh computers the company gave to the school. Imagine her surprise at the sight of a crystal island in rows of desks.

Through the glass walls of the library's third floor, Gao saw long, white desks and tall stools with the logo of Shanghai Liangyu Science & Technology Development Co inside the 40-square-meter space, standing out more than Apple Inc's own company image.

"It just does not fit in there," said the master's candidate. "It takes up so much space and looks like a shop."

It's not a shop and never will be. It's just for an experience, said a marketing director surnamed Bai from Shanghai Liangyu, an authorized Apple reseller.

"We respect the atmosphere in the university and library," Bai added. "We don't want to disturb that."

"Apple sales are very successful," said Chen Bo, another Peking University graduate student. He likes the idea and thinks it would help to digitalize the acquisition of information. "Their resellers are just everywhere."

Among Apple sales channels in China, the resellers are not all official. The US company has shaky control over unofficial vendors, while Apple stores are experiencing expansion and challenge at the same time. It's a unique problem for Apple in the biggest developing country, where the California-based electronics company does not have direct contact with all resellers and contract distributors to manage unofficial retail outfits, according to Sun Peilin, a technology analyst at research firm Analysys International.

Apple's sales in China surged six-fold to $3.8 billion in the last fiscal quarter that ended in June, accounting for 13.3 percent of its global revenue, a "key" share according to the new chief executive officer, Tim Cook.

"I firmly believe that we're just scratching the surface right now," Cook said in a July 15 earnings call before he was promoted from chief operating officer. "I think there is an incredible opportunity for Apple."

"Normally, small retailers have only two or three locations, and they want to save money wherever they can," a former Apple China employee said, according to the magazine Global Entrepreneur. "This caused problems for management."

In the Zhongguancun high-tech area of Beijing, a hub of electronics malls, big companies mostly started with Asus, Hewlett-Packard or other PC brands. Some small resellers obtained Apple's approval to sell its products years ago, but the business stayed lukewarm until last year when the iPhone and iPad became faddish.

The suddenly lucrative gadgets also attracted scalpers and even nurtured an entire underground market. Forty-nine percent of the 1.07 million iPads sold in China in the last quarter were through vendors operating without a license, according to Analysys International. Unauthorized resellers of Apple products throughout China sell real iPhones and iPads after buying them overseas and smuggling them into the country to escape taxes. Chinese officials found 22 fake Apple stores in the Southwestern city of Kunming alone, according to an August Xinhua report. The news agency didn't say whether the stores' supplies were legally obtained or not.

"Apple does not have strong control over small dealers under general distributors," Sun Peilin said in an email to China Daily. "Its sales structure is quite simple but in China, when you have multiple layers of resellers, relations can be very complicated to manage."

Apple Store, the company's official retail channel, opened its first China location in 2008 and has now become one of the company's biggest revenue contributors, according to Analysys International. Fifth and sixth Apple stores in China debuted on Sept 22 and Sept 24 respectively in Shanghai and Hong Kong.

"This is the only place I know where I can buy Apple stuff," said Stefan, a German customer at Sanlitun Apple Store in Beijing. "I like the service."

Stylish decoration and attentive service generated $5,647 from each square foot in Apple Stores in the last four quarters ending in June, making them more productive than both Tiffany & Co and Best Buy Co official outlets, according to research firm RetailSales.

An official retail store at Joy City, a shopping mall in Beijing, holder of a global sales record since it opened in September last year, welcomes 20,000 people every day. That is 100 for each salesperson even if all 200 employees are on duty.

"Of course they cannot take care of everyone of us," Xie Mengya, a student from Tsinghua University, said at the Sanlitun retail store.