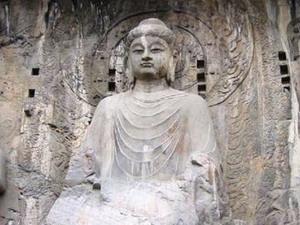 The Longmen Grottoes (Dragon's Gate Grottoes) or Longmen Caves are located 12 km south of present day Luoyang in Henan province, China. The grottoes, which overwhelmingly depict Buddhist subjects, are densely dotted along the two mountains: Xiangshan (to the east) and Longmenshan (to the west). The Yi River flows northward between them.

For this reason, the area used to be called Yique (The Gate of the Yi River). From north to south, the distance covered by grottoes is about one km. Along with the Mogao Caves and Yungang Grottoes, the Longmen Grottoes are one of the three most famous ancient sculptural sites in China.

The grottoes and niches of Longmen contain the largest and most impressive collection of Chinese art of the late Northern Wei and Tang Dynasties (316-907). These works, entirely devoted to the Buddhist religion, represent the high point of Chinese stone carving.

Altogether there are more than 2,100 grottoes at Longmen, with more than 100,000 statues, some 3,600 inscriptions and stelaes, and forty Buddha's stupas. The finest grottoes are the Northern Wei-period Guyang Grotto, the Binyang Grotto, the Lianhua Grotto, and the Tang-dynasty Qianxi Temple, among others. Some of the stelaes and inscriptions have become treasures among China's calligraphic arts, including the Tang-dynasty calligraphed work by Chu Suiliang (596-659).

During the Warring States Period, the general Bai Qi of Qin (state) once defeated the allied forces of Han (state) and Wei (state) at the site. Construction of the grottoes themselves began in CE 493. The area was inscribed on the UNESCO World Heritage List in November 2000. According to the inscription the Longmen Grottoes are an illustration of "the perfection of a long-established art form which was to play a highly significant role in the cultural evolution of this region of Asia."

The Binyang Grotto
The Binyang Grotto is on the northern part of Longmen Mountain and is composed of three caves. The middle one was begun around 500 AD and was finished in 523, so took twenty-four years to complete. It is recorded that 802,366 craftsmen worked on this grotto. The central Buddha or Sakyamuni and two Bodhisatvas have long, thin faces, and the folds of their clothing is very fine, a characteristic of Northern Wei art. The Lotus?flower or Lianhua Grotto was built in the late Northern Wei period. Its main Sakyamuni is standing and is 5.1 meters tall. The cave is carved with architectural details and floral designs, with scrolling grass patterns, lotus flowers, Baoxiang flowers and so on, all very finely carved. A large lotus flower is carved in high relief on the ceiling.

The Yaofang Grotto
The Yaofang Grotto depicts medicinal cures, is in the northern part of Longmen Mountain. It was begun in the late Northern Wei period and was finished during the Tang-dynasty period of Empress Wu Zetian, so construction lasted around two hundred years. This is the only relatively large cave at Longmen that has Northern Qi statues. Some 140 different kinds of medicines and treatments of various illnesses are carved on either side of the cave entryway, which are very important research material for study of China's ancient pharmacopeia.