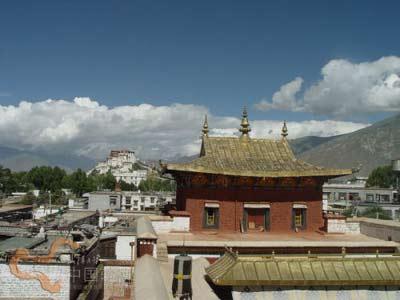 Located in the northwest of Lhasa, to east of the Potala and north of the Jokhang, Ramoche Monastery, is considered the most important temple in Lhasa after the Jokhang Temple. With unique architecture, which combined with both Tibetan and Han's architectual styles, and Tibetan relics such as the encased lotus flowers, coiling cloud, jewelry, particular Tibetan Characters and so on, it is really worth visiting.

Ramoche Monastery is the sister temple to the Jokhang. It was originally built to house the Jowo Sakyamuni image that is now in the Jokhang. The principal image in Ramoche is Mikyoba, brought to Tibet in the 7th century as part of the dowry of King Songsten Gampo's Nepali wife, Princess Bhrikuti. The image represents Skyamuni (Sakya Thukpa) at the age of eight years. It is said to have been badly damaged by Red Guards during the Cultural Revolution.

Ramoche Monastery was built at the same time as the Jokhang, but it is thought that unlike the Jokhang, it was originally built in Chinese style. By the mud-15th century it had become Lhasa's Upper Tantric College, Gyuto (see Gyume, following, for information about Lhasa's Lower Tantric Colllege).

The Mikyoba (Akshobhya) image can be seen in the Tsangkhang, a small chapel at the far rear of the temple. There is a circumambulance circuit lined with prayer wheels around the perimeter of the temple.

The main building in Ramoche Monastery now has three stories. The first story includes an atrium, a scripture hall, and a Buddha palace with winding corridors. the second floor is mainly residential but has a chapel with an image of Buddha as King of the Nagas. The third story contained the bedroom and chapel once reserved for Dalai Lama.

Upon entering the main building, one can see the ten large fluted pillars holding some of the remaining Tibetan relics such as the encased lotus flowers, coiling cloud, jewelry, and particular Tibetan Characters. The golden peak of the temple with the Han-style upturned eave can be seen from any direction in Lhasa city.

Though today Ramoche Monastery is a little tired and down at heel, it is an interesting example of the combination of Han and Tibetan architectural styles, further more, it is considered one of the key cultural relic protection sites of the Tibet Autonomous Region as well as a popular attraction in Lhasa.

Besides Ramoche Monastery, others atrractions which filled with colorful Tibetan figures, cultual diversity, are also worth visiting. 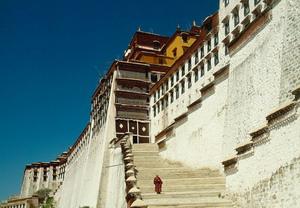 Potala Palace the architectural wonder is Lhasa's cardinal landmark. It can be seen from all directions for miles around. With its world-wide reputation, the Potala Palace stands on the Red Hill overlooking the Tibetan city of Lhasa...more 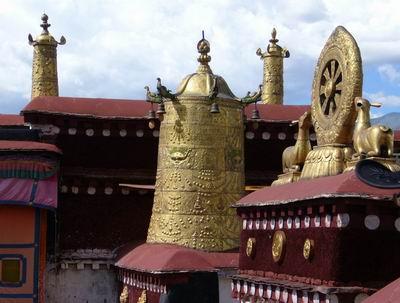 Located in the center of the ancient city of Lhasa, the Jokhang Monastery was built in the seventh century by Songtsan Gambo, the Tang Princess Wen Cheng and Nepalese Princess Bhrikuti ...more 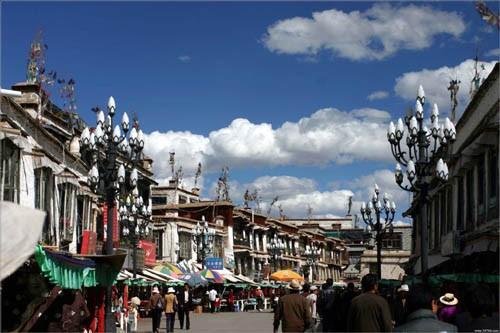 One of the best places to view modern day Lhasa and its diversity of culture is in the bustling Barkhor, a section of the old city. Here, the Barkhor Market has all manner of goods from turquoise jewelry , colorful trational Tibetan clothes and so on ...more