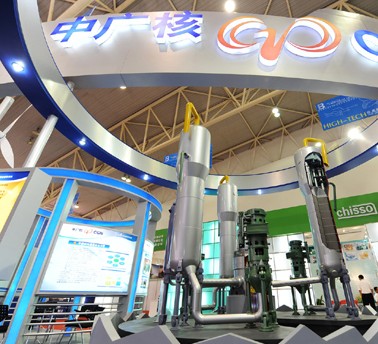 A model of a nuclear reactor at an exhibition in Changchun, Jilin province. China has 13 nuclear reactors in operation and 25 more in the pipeline. {Photo / China Daily]

Chinese power companies press ahead with plans for new plants

"State-owned power generators are still keen on being part of the nuclear building group," said Xiao Xinjiang, a nuclear power expert at the Energy Research Institute of the National Development and Reform Commission (NDRC).

With the exception of China Power Investment Corp, the country's five thermal power-generating companies are not yet qualified to develop nuclear power.

"The power groups expect to obtain qualifications to develop nuclear power plants, which requires a track record in project development, through investment in these nuclear projects," said Xiao.

The three nuclear projects are still in the preliminary stage, and are unlikely to obtain approval before 2020, according to Xiao.

The country has 13 reactors in operation and 25 more under construction. Meanwhile, preliminary work is being undertaken for dozens of nuclear projects that await government approval.

But the freeze on new projects is unlikely to derail the country's goal of attaining 70 gigawatts (gW) of nuclear capacity by 2020.

With the 25 units currently under construction, China could easily reach 40 gW in nuclear capacity by 2015.

The country will likely grant approvals for the inland nuclear power plants in Jiangxi, Hunan and Hubei provinces once the freeze is lifted, and this will help the country achieve its goal by 2020.

Xu Yuming, vice-secretary general of the China Nuclear Energy Association (CNEA), said recently that China would reach at least 70 gW in nuclear capacity by 2020 despite the halt on new approvals.

The country is expected to issue its nuclear safety plan in August, after which it will resume the approval process, Lin Chengge, former deputy director of the National Nuclear Safety Administration, told China Daily earlier.