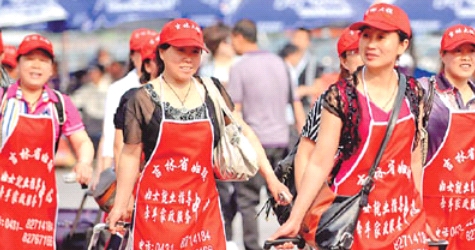 Domestic workers in Beijing are to be trained and traced more effectively as part of efforts to improve quality and better meet growing demand, city authorities announced on Wednesday.

New policies aimed at boosting the industry over the next five years include creating a database of home helpers - or ayi- hired in the capital and setting up more specialized training schools.

In the future, workers without the necessary qualifications will also be barred from getting jobs as ayi, say officials.

"There just aren't enough domestic workers to meet the needs of the market, while the quality is still very low as most don't have any training," said Song Fengjing, cityl's deputy director of the human resources and social security bureau.

As most people working in the industry in Beijing arrive from central and western parts of China, he said recruitment and training bases will be set up in these source areas to ensure a healthy supply.

"We'll be building a database to record each worker's background and performance, which we hope will help us trace personnel if any problems arise," added Song.

More than 3,800 registered housekeeping agencies are registered with the industry and commerce bureau, employing a total of 400,000 people.

However, official statistics show that just 39 percent of people hire ayi through an agency, with almost 50 percent instead relying on recommendations from family and friends.

"I've had three nannies since I gave birth in February," complained public relations executive Judy Fong, who moved to Chaoyang district from Hong Kong three years ago. "I found each through an agency, but none of them have been dedicated or skillful. I think experience, patience and a good reputation are really important.."

Just four companies have so far been approved as pilot training centers for ayi. One of them is Dongfang Beiyou Housekeeping, where staff say earnings have increased 275 percent since it was founded in 2001.

"We witnessed an increasing demand for maternity matrons and nannies for infants in the last two years, which now account for almost two-thirds of (our workers)," said Wang Hongliang, manager of a domestic workers agency.

"The 1980s generation are becoming parents and they have higher demands on our workers, expecting them to take care of the babies and offer early-years education. So we design courses to meet their needs."

Li Dajing, director of Beijing Home Service Association, added that the capital will also need more ayi to cope with the ageing society. "There are more than 17 million people aged over 65 in Beijing and most of them do not live with their children. Convenient, professional home services will definitely sell, and it will create lots of job opportunities for the young."

However, the government's new policies are not only aimed at improving the industry for customers. Housekeeping agencies are also being offered incentives to have contracts with their workers to better protect their rights.

Companies who sign on the dotted line can get millions of yuan from authorities to go toward pensions, as well as medical and unemployment insurance. They will also be exempt from paying business tax for three years.

"Without a contract, employers can reduce my hours according to their needs, which affects my money," said Huang Li, 35, from Sichuan province, who has worked as an ayi in the capital for eight years.

However, she argues that any grading system for domestic workers needs to be scientific. "Many people decide on first impression, so it's important to work with heart and keep good relations with employers," she added.