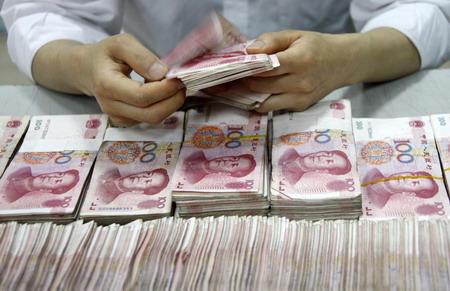 An employee counts banknotes at an Industrial and Commercial Bank of China branch in Huaibei, Anhui province. [Xie Zhengyi / for China Daily]

BEIJING - The chances of a Greek-style debt crisis unfolding in China appears remote in spite of the burgeoning local debt, but risks from the surge will test the nation's financial health over the next few years, experts said on Wednesday.

Crisis concerns in China developed after a big chunk of the new lending was used to fund public work projects which are implicitly guaranteed by the unstable fiscal revenue of local governments.

"Many of these investments were made without a clear consideration of returns or the ability to repay the funds," Chen said. "If these debts sour, many Chinese banks will be saddled again with massive bad loans."

If one were to take into account the entire hidden debt, China's overall debt would be around 50 percent of the country's GDP, said Jia Kang, head of the Institute of Fiscal Science Research under the Ministry of Finance.

According to a report released by the Chinese Academy of Social Sciences, the local government debt service ratio, an indicator that measures the ability to repay debt, could hit 26.6 percent by 2012 and may not fall below the warning line of 20 percent before 2014.

The State Council on Sunday urged banks and officials to clean up their financing of local investment vehicles, as some of them were dangerously loaded with debt built up on implicit assurances from local officials.

The latent risk embedded in borrowing linked to local governments has also drawn particular attention from the banking regulator. The China Banking Regulatory Commission estimated that outstanding loans to over 8,000 funding vehicles set up by local governments jumped to 7.38 trillion yuan by the end of 2009, up 70 percent, or 3.05 trillion yuan, from a year earlier.

"Some banks gave out a huge amount of loans to local investment vehicles in a concentrated manner and scrutiny of such loans was lax," the regulator said in its 2009 annual report.

Despite growing worries over local debt, experts said the financial risks are still manageable, but the leverage of public entities must be strictly policed and restricted in the future.

"Some local borrowing can be justified by the central budgetary allocation to local projects, and some local spending took place in regions that will continue to enjoy high growth in tax revenues for the foreseeable future," Fan Gang, professor of economics at Peking University and former adviser to the central bank wrote in a China Daily column earlier this month.

Lian Ping, chief economist at Bank of Communications, said China could avoid a Greek-style crisis, as the nation's public financial system is fundamentally different from that of Europe.

"The governments of European countries usually have to maintain high government deficits to support their bloated social welfare systems, and the additional spending to combat the financial crisis added a further burden to their government finances. In China, even after the local debt is taken into account, the scale of public debt is limited," he said.