Real estate tycoons in China have seen their wealth shrink by 25 percent over the past three years thanks to government attempts to curb the rampant property speculation in the city.

The Hurun Research Institute's China Property Rich List reported on Tuesday that the 50 richest Chinese property developers have 11.6 billion yuan ($1.7 billion) this year, on average. That's down from the record high of 15.5 billion in 2007, and 12 billion last year.

This is the fifth year for the annual report.

"The declining wealth shows that China's real estate market is undergoing a major adjustment (through the government's tightening and property price curbs)," it went on.

Wang Jianlin, 56, chairman of the Wanda Group, came in as the property king of kings with a personal worth of 28 billion yuan, at seventh place on the list.

Trailing him is Wu Yajun, 46, of Longfor Property, with a mere 27 billion yuan, making her China's property queen.

So, only two tycoons dealing only in property managed to make it to Hurun's top 10 this year, compared with six last year.

"This year is the first time in 10 years that a property tycoon has not made the top five," said Rupert Hoogewerf, founder and compiler of the Hurun Report.

It has been a more difficult year somewhat for residential properties, mainly because of government attempts to keep prices down, with stocks down a quarter, on average, according to the report.

Still, urbanization in China has meant that property is still the greatest wealth creator, it added. Property tycoons are "far and away still richer than the rich in any other industry".

The average wealth of the top 10 property developers is more than double that of the next richest people in retail sales and IT.

Property names dominated the Hurun Rich List overall, with 21 out of the top 100. 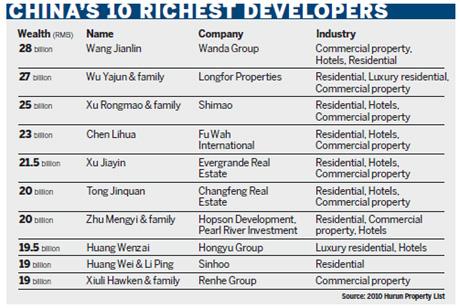