China stocks to 'break out'

China stocks to 'break out' 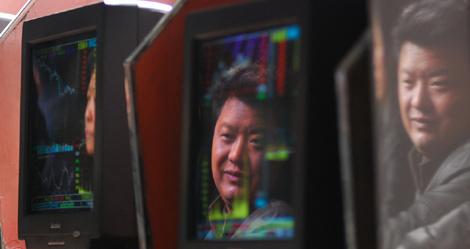 SINGAPORE: China's stocks, among the worst performers globally this year, may "break out" in the second half as the yuan strengthens and slowing inflation eases concerns about monetary tightening, Morgan Stanley said.

A "weak" recovery in developed nations may reduce the risks from higher consumer prices while a stronger Chinese currency will fuel gains in Chinese stocks traded in Hong Kong, Morgan Stanley analysts led by Jerry Lou wrote in a report on Tuesday.

"Because we think growth will remain robust and inflation will ease in the second half, the market could break out with tightening concerns easing," Lou wrote.

"Given the strong momentum in China's domestic economy and the already recovering export sector, we think even a double dip in developed economies in 2010 would not derail China's growth."

The benchmark Shanghai Composite Index has dropped 4.7 percent this year, the fourth-worst among 92 global measures tracked by Bloomberg, amid concerns over the nation's currency policy, the outlook for the property market, the risks of non-performing loans in the banking industry, the impact of tightening on growth and the outlook for the global economic recovery, Morgan Stanley said.

Widening deficits in Europe and a failure to boost employment in the US have spurred concerns the global economic recovery will falter. A so-called double dip is a "real possibility" because the global economy remains "quite fragile," World Bank Chief Economist Justin Lin said on Thursday.

Federal Reserve officials this month repeated a pledge to keep interest rates low for an "extended period", with Chairman Ben Bernanke saying that the US continues to require "accommodative monetary policies".

Meanwhile, tensions between the US and China over the value of the yuan have increased amid calls by US lawmakers to label the Asian nation a "currency manipulator".

China, which has said it won't yield to foreign pressure to revalue its currency, has kept the yuan at about 6.83 per dollar in the past 20 months as the global recession weighed on demand for exports.

Morgan Stanley economist Wang Qing expects the yuan to resume a "gradual appreciation", starting with a marginal revaluation early in the second half, Lou wrote in the report. The currency could end the year as much as 5 percent higher against the dollar, the analyst also said.

Efforts by Chinese officials to curb rising property prices will weigh on the property and materials industries only in the "near term", Morgan Stanley said. A credit crunch is also unlikely, according to the report.

The brokerage is joined by Martin Currie's Chris Ruffle in predicting a rebound in Chinese shares.

Ruffle, who helps manage $19 billion, said in an interview with Bloomberg Television on Friday that the stock market may "move forward again" after May and June as inflation concerns ease.