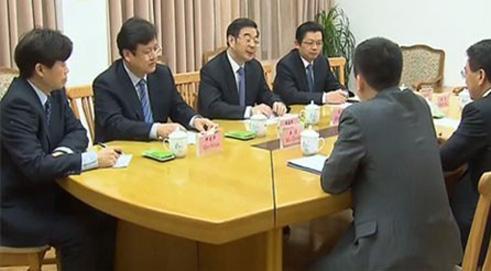 On the afternoon of Jan. 25, Secretary of the CPC Changsha Municipal Committee Zhou Qiang met in Changsha with Chairman of Corporate Finance, Asia and Head of Corporate and Investment Bank in China of Deutsche Bank Henry Cai and his delegation.

For the "Twelfth Five-Year Plan"(2011-2015) period, Hunan will continue to boost new-type industrialization, new-type urbanization, agricultural modernization and informatization and the building of the "Two-oriented" Society (resource-conserving and environmentally-friendly society), and vigorously internationalize its service sectors such as financial services, introduced Zhou.

Henry Cai spoke highly of Hunan's substantial achievements made in economic and social development. He said that Deutsche Bank is optimistic about the development environment in Hunan and the enterprises' growth potential as well.

He stated that the bank is keen on the idea of giving full play to its advantages as a global network and seeking cooperation with Hunan Province in such undertakings as inviting strategic investors and facilitating Hunan enterprises' going global and listing on the stock market to seek financing.