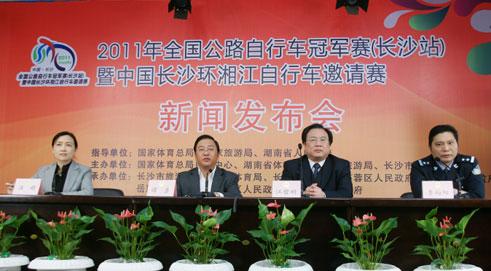 The Organizing Committee of the 2011 National Road Cycling Championship (Changsha Section) & 2011 China Changsha Cycling Invitational Race along Xiangjiang River convened a press conference on the morning of March, 29, 2011. It released that the race is going to unveil its curtain on May, 4 on the Xiangjiang riverside of Changsha.

Continuing the theme of Endless Enjoyment on Bicycle in Happy Changsha , the event will greatly display local tourism resources featuring the green mountains, clear water and beautiful isle along the cycling route.

It is the first time across the country to unite the official athletes with the amateurs. And it is also the first time for the General Administration of Sports of China to settle cycling race in Hunan.

According to the conference, its opening ceremony will be convened simultaneously with the launching ceremony of 2011 China (Changsha) Red Tourism.