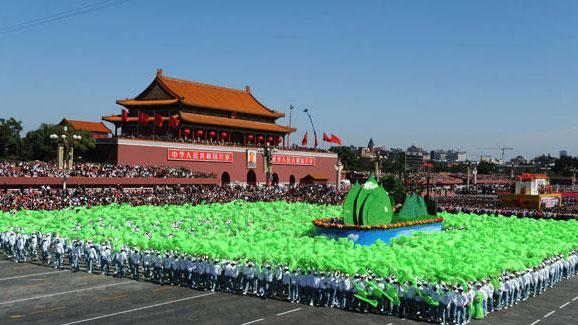 After over two months of intense training, nearly a thousand students of BIFT participated in the Grand Parade at the Tiananmen Square on October 1. As a major part of the Square Array themed Development of Ecology and Environment Protection , our students demonstrated both their best appearance and their most exquisite manners when marching past the Tiananmen Rostrum which resulted in roaring applauses.

More than 100 students also took part in the gala on the square that evening. Over 200 styles of costumes depicted the entire series of celebratory activities, especially in the 36 Parading Square Arrays at Tiananmen Square, which were designed and engineered by the members of faculty in BIFT, with Professor Liu Yuanfeng, President of BIFT, as the team leader.

It took almost six months for the team to perfectly accomplish this great political as well as artistic assignment. Moreover, our institute undertook the honorable task of designing and tailoring the uniforms of volunteers, which served as additional proof of the academic and technological capacity of BIFT.

Given these outstanding achievements, President Liu Yuanfeng was awarded the Best Contributor to the 60th National Anniversary in Beijing Textile Industry , the only one from higher educational institutions to win this honor.