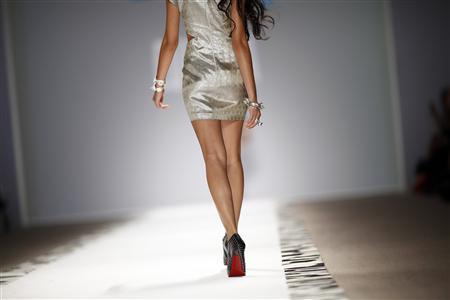 Hemlines are headed up, way up, in fashions for spring and summer 2010 that appeared on catwalks this week in New York where top designers gathered for a semi-annual array of shows.

"I've never seen so much leg in my life," said designer Stan Herman, former head of the Council of Fashion Designers of America. "I wonder if everybody wants to save fabric."

Other minis had flounce and flare, such as skirts by Michael Angel and dresses by Adam Lippes.

The seaside was a frequent theme. Derek Lam showed playful sunsuits and halter dresses, Lela Rose used hues of sea glass blue and grass green and Nicole Miller used swirls of blues and blacks in a print she called riptide.

Ports 1961 used seashell colors, Iodice looked to mother-of-pearl and marine and Willow made a blue, black and ivory print the designer said was inspired by giant sea clams.

"There's certainly a lot of color on the runway," said Ken Downing, fashion director at Neiman Marcus. "All the inspiration of water and sky, be it shades of blue into green, this whole, very beautiful summer sunset palette of marigold and yellow and beautiful oranges, looks good to the eye."

"When you ask every woman who tries one on, they'll say it's a lift. They feel good about themselves," she said.

"The florals, the paint-splatters look almost personalized or 'luxe,'" she said.

Longer tunics were popular, sheer and draped over bandeau tops by Yigal Azrouel and with one sleeve by Tony Cohen, while blazers were loose and oversized like they could have been borrowed from a boyfriend.

Tuxedo jackets made an appearance, as did rugged anoraks with drawstring waists and hems.

Silhouettes were soft. Many pieces had draping and extra folds of fabric in dolman sleeves or wrapped like kimonos. Michael Kors folded fabric into origami dresses and skirts.

Fabrics were washed, crumpled, hammered or outright abused, as in the shredded wool cobwebs, burned lace and sandpapered silk used in macrame and crocheted dresses by Rodarte.

Ralph Lauren opted for ethereal blues and silvers in a collection that merged casual denim and evening wear looks.

Symmetry was rare. Dresses might have just one shoulder, jackets had one sleeve and hems were cut at an angle.

"We have seen color, we have seen interesting embellishments, new silhouettes that will offer something to our customers that they don't already have," Colleen Sherin, fashion market director for Saks Fifth Avenue, told Reuters.

"So far, we're pleased with what we're seeing," she said.

Trousers were slouchy and relaxed, harem style or with drawstring waists. Long full shorts returned, with pleats by Milly or rolled up and tied by Monarchy.

"It's all about the bottom line. We can 'oooh' and 'ahh' until we're blue in the face, but if that piece of clothing doesn't sell, then who cares," stylist Jesse Garza said.