Write: Erin [2011-05-20]
Tags: exchange rate
EU - This week, the situation is reported to be steady on the slaughter pig market throughout Europe.

The quotations remain unchanged in almost all EU member countries which take part in the price comparison. In Great Britain, the quotation went down by one penny. As a result of exchange rate changes, the corrected price remained nearly unchanged. The Swedish corrected quotation went up by one cent for the same reason; however it remained unchanged as regards the original quotation. In Poland, the price went up by 0.20 zloty. The corrected version, however, it went up by seven cents because there was a noticeable shifting of the euro / zloty exchange rates. This kind of developing is suitable to support exports of pigs for slaughter as well as of pork from Germany and other EU member countries towards Poland.
Slaughter weights have once again gone down in Spain, and for this time of year, the number of pig slaughters carried out is found on an unusually high level. There, impetus is waited for related to demand for pork in order to make price increases enforceable. The supply and demand situation is well balanced in the Netherlands. As a result of the cooler temperatures and of daily growth getting back to normal therefore, the quantities of pigs for slaughter slightly went up again in the Netherlands.
Trend: The well balanced supply and demand situation is continuing at the beginning of the week. Thus, the redemption prices are expected to keep steady. 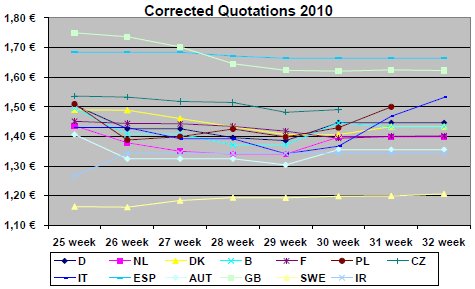 Explanation
1corrected quotation: The official Quotations of the different countries are corrected, so that each quotation has the same base (conditions).
base: 56 per cent lean-meat-percentage; farm-gate-price; 79 per cent killing-out-percentage, without value-added-tax (VAT)