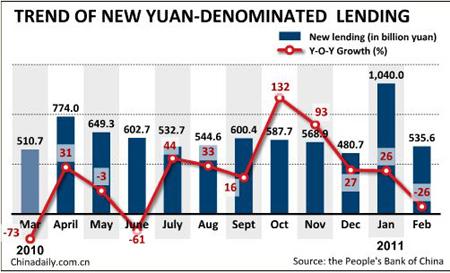 The figure was 192.9 billion yuan less than February last year, said the PBOC in a statement on its website.

By the end of February, the balance of outstanding yuan-denominated loans stood at 48.89 trillion yuan, up 17.7 percent from a year earlier.

The rise was 9.5 percentage points lower than the rise a year earlier. China's broad money supply (M2), which covers cash in circulation and all deposits, increased 15.7 percent year on year to 73.61 trillion yuan by the end of February.

The rise was 9.8 percentage points lower than the same period last year.