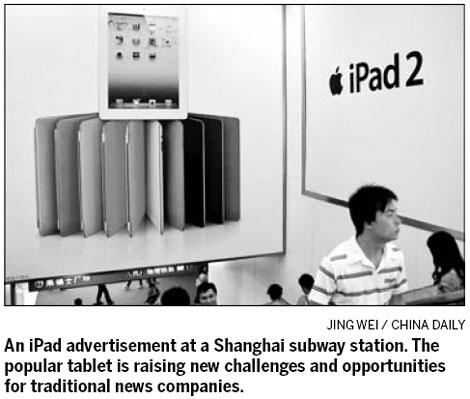 The lawsuit filed by Beijing News alleged Minesage Co Ltd illegally used its content and layouts in software that was developed for the iPad.

The newspaper discovered the app called Chinese Newspapers last year before it developed its own software for the iPad.

"We sent documents to the company asking them to stop the violation, but got no response," said a spokesman for Beijing News. "As a result, to protect our intellectual property rights and profits, we made the decision to bring legal action against the software developer."

Minesage argued in court that it showed readers the content copyright belonged to the original media.

In addition, the company said it only provided links to the news, so it did not harm the newspaper's interests and might actually bring in customers.

But the judge found no description of link services or news sources in the software support documentation.

The company also admitted the software allowed customers to download e-papers without visiting a newspaper's website, which the court found to be illegal.

Zhang Fan, an expert at Chinese IT industry research firm Analysys International, said the court ruling is not surprising.

"It is clear that the company violated the newspaper's Internet transmission rights because it neither received authorization nor paid the copyright owner," Zhang said.

He noted that the rising popularity of the iPad and iPhone across the nation has led to an increasing number of traditional publishers to develop e-paper editions, bringing new challenges to copyright protection.

"It is progress that they innovate forms of traditional media, but software developers should not forget to show respect to copyright owners and create within the legal framework," said Zhang.

Yuan Fuzhen, deputy director of the Shanghai Intellectual Property Research Institute, noted that traditional media could learn from the case.

He also suggested that lawmakers increase compensation in copyright violations.

"The compensation is not very much, which creates an imbalance between the cost of defending one's rights and the illegal income to the infringer," Yuan said.