Out with the old, in with the new

Out with the old, in with the new 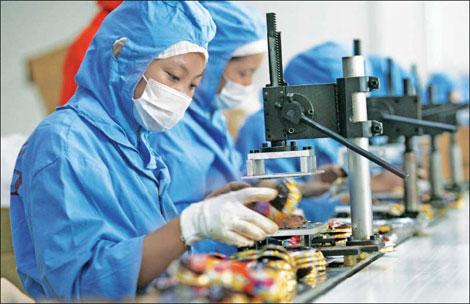 A chocolate factory in Nantong, Jiangsu province. Chinese manufacturers are upgrading their equipment to gain an edge in competition and reduce energy consumption. [China Daily]

The old-fashioned machines in the factory of Jinbiao Woolen and Textile Mills Co Ltd in an underdeveloped county in southern Jiangsu province whirl and grind all day, churning out reams and reams of cheap cloth to supply the many garment makers in the region.

Workers toil in the heat and noise inside the grim workshop that conjures up images of Dickensian conditions and William Blake's "dark, satanic mills." A middle-aged mechanic in sweat-stained undershirt and shorts walks from machine to machine listening for any unusual groans from the aging gears and belts that can presage trouble.

Although China has been experiencing rapid economic growth during recent years, it is still falling behind in terms of productivity.

While Japanese textile workers are busy pressing buttons on computerized machines and increasing production by leaps and bounds, some of their Chinese counterparts are sweating in workshops without air-conditioning, using the sort of machines that disappeared from Japanese factories about 20 years ago.

It is a gap that the Chinese government intends to close.

On July, 19, the State Council approved a comprehensive work plan to conserve energy and reduce emissions during the 12th Five-Year Plan (2011-2015) period. The aim of the plan is to save energy by eliminating inefficient methods and establishing advanced production facilities.

The robust growth of environmental-protection companies is the most convincing proof of rising support for the government's policy. Some five companies, led by Zhejiang Fuchunjiang Environmental Thermoelectric Co Ltd - which specializes in the generation of electricity and heat steam through waste products - saw their shares rise by more than 5 percent on the day the work plan was approved.

About a week before the work plan was approved, the Ministry of Industry and Information Technology (MIIT) came up with a list of production lines and facilities that must be withdrawn from service by the end of the year. The list covers some 2,255 companies from 18 industries, with the focus on eliminating backward production facilities in heavy industries such as iron manufacturing and cement production.

Two eastern coastal provinces, Jiangsu and Zhejiang, have been leaders in terms of Chinese economic growth in recent years. But that fact doesn't necessarily indicate that they have no outdated factories or production methods. As China's two major textile-manufacturing areas, their focus will be mainly on eliminating old-fashioned machinery and methods.

Among the 66 production facilities that need to be eliminated in Jiangsu, seven are related to the textile industry, while in Zhejiang 17 of 74 outmoded factories are textile companies.

Although the national government is resolute, some local companies are turning a blind eye to the MIIT list.

Jiangsu Jinbiao Woolen Textiles, based in the city of Jintan in southern Jiangsu province, must eliminate about 50 machines according to the list - that's equal to annual production of more than 10 million meters of woolen textiles. However, two weeks after the publication of the list, the company claimed it was unaware of the MIIT requirements.

"The company is running smoothly. None of the machines you have mentioned is being replaced," said Mao Xiaozhong, a sales manager for the company.

That attitude may be confined to small companies, though. Their larger counterparts are much more likely to introduce the sophisticated machinery that will help boost productivity.

Having started from scratch in 1998, Ling Lanfang is now chairman of Silk Road Holdings Group Co Ltd, a leading manufacturer of Chinese silk, which is based in northern Zhejiang's Huzhou city and has annual sales of 1.8 billion yuan.

Ling's motto, "I will still buy new machines even if I have to sell my underwear", may be designed to amuse, but it may also account for much of his success.

"It means that the new machines weigh way more than my self-esteem," he laughed.

Although China is the biggest textile manufacturer globally,its textile industry, as Ling sees it, still faces two deadly failings. The first is low productivity and the second, the exhaustion of resources.

The first part of the silk-making procedure involves the use of an iron-grinding machine, which prepares the raw materials for further combing into the silk fibers. Despite having no Western examples to emulate, Silk Road has managed to improve the machines already in service, and has increased annual productivity to 4 tons for each worker, overtaking the single annual ton made by its Japanese counterparts and the company's previous capacity of less than 1 ton.

Even leading companies such as Silk Road are still dependent on these machines, which date from the 1990s. However, Silk Road will wave goodbye to the noisy and non-computerised machines by the end of the year and new technologically advanced machines will take their place.

"It is a lot of money, but it's worth the investment. With the new machines, the productivity of each worker will be increased 20-fold annually, because each employee will take charge of a greater number of machines that run at faster speeds. Meanwhile, the quality of the products will also be improved and the employees will work in a more comfortable environment with less humming and buzzing," he said.

"But it is a great challenge for small companies. Higher productivity requires greater stocks of raw materials. If the company stocks more materials worth some 1 million yuan, it will shoulder an extra risk of about 20 million yuan," added Ling.

But the risk is worth taking, especially for companies wishing to compete in the domestic market.

"Actually, the requirements laid down by the MIIT are quite low. If one had to score 60 out of 100 to get a pass in an exam, most of the production facilities we are being required to eliminate would only score 20 ... seriously," said Ling.

It's natural that companies in the less-developed areas of the country will require more time to keep up with the pace of those in developed areas. But leading companies should shoulder more responsibility by addressing the second problem that the textile industry faces the waste of natural and human resources, said Ling.

"The biggest problem for textile companies is water pollution. The waste that textile companies discharge will lead to eutrophication (a process whereby bodies of water gain a glut of nutrients that stimulate excessive plant growth) nurturing all kinds of algae," said Ling.

"Therefore, our company spent a year and invested some 7 million yuan in building our own sewage disposal system, which is capable of purifying coal-black waste into tap water," said Ling proudly.

Other industrialists in Zhejiang are also putting a brave face on the issue. Gao Tianle, chairman of the Tengen Group, a leading Wenzhou-based industrial electronics company, told the Zhejiang Weekly newspaper that the group will definitely shoulder the responsibility for environmental protection.

"Our group will not produce anything that can cause any possible harm to the environment," Gao said.

"To remain profitable while becoming more eco-friendly, we will need to invest more in research and development."

Sun Shaoding, chairman of Zhejiang Fu Kang Group, said that saving energy is good for factory owners. "As a privately run company, we have to be responsible for all the expenses and profits on our own and we will eliminate production lines that are inefficient and wasteful."

Fu Kang, which was established in 1995, has been a leader in the region's packaging industry for years, winning many national prizes for quality. Most of the machinery in the group's factories is imported from Germany, Japan and Canada, Sun said.

"Basically, packaging companies produce very little environmental pollution," Sun said. To further reduce any damage,"we have recently introduced water-based ink for printing". Water-based ink is considered more environmentally friendly than the chemical-based ink the company used in the past. "We will review every step in the production process to ensure that we produce as little pollution as possible."

Wenzhou's local government has produced a list of companies that are low in efficiency and high in pollution. Companies, including producers of leather goods whose annual production is less than 200,000 units, will be closed this year.

"We are not on the list and we will be fine," said Yu Jian, deputy general manager of Wenzhou San Marco Shoes Co Ltd.

The nine-year-old company, which owns one of the better-known shoe brands in the domestic market and has annual sales of more than 100 million yuan, has been adhering to the even-stricter standards of the European Union (EU), its biggest market.

"The production lines in our company can meet all the national standards of environmental protection in terms of sewage disposal and gas emissions," Yu said. After complaints filed by the EU about residual benzene found in the company's shoes, the company started using a new benzene-free glue. "It was no big deal," he said.

Cangnan County, affiliated to Wenzhou, has already met the local government's initiative to increase the capacity of the textile industry by recycling waste textiles. Yang Chengtao, a government official in Cangan, said the county produced some 900,000 tons of recycled fiber from 1.12 million tons of textile off-cuts purchased from around the country and the Southeast Asia region.

"The amount of recycled fiber is equal to the yield of some 3,000 square kilometers of cotton fields. This number was even attractive when the price of cotton soared last year. It provide a good opportunity for textile companies in Cangnan to transform their growth mode," said Yang.

In the 12th Five-Year Plan, the nation is aiming to transform the country from a being "big manufacturer" to a "competent manufacturer". After more than 40 years in the industry, Ling points out the two problems facing Chinese manufacturing across the board we do not know whom we are working for and we cannot work for ourselves.

"We should bear in mind that internationally renowned brands, such as Hermes, Louis Vuitton and Chanel, are working for themselves," said Ling.

"The Chinese used to enjoy some advantages in human resources, land and the environment. But now, those advantages are waning. If we cling to the old-fashioned methods, we will have no right to settle the price. The goods we produce will be highly vulnerable to international interest rates, labor costs and the size of the order. We will not be able to compete with those world-famous brands," he said.

"Only with more advanced technology and highly valued intangible assets, such as the brand's culture, can we break away from the previous methods of economic growth," he concluded.