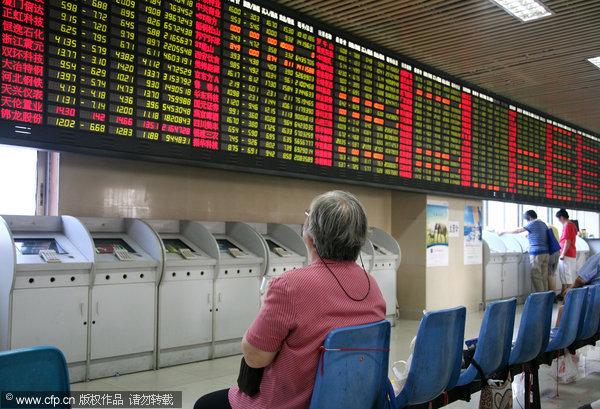 An old woman looks at the billboard showing the prices of the stocks at a securities company in Shanghai. [CFP]

Standard & Poor's on Friday cut the U.S.'s debt rating to AA+ with a negative outlook for the first time in the country's history.

Unencouraging numbers in U.S. economic data and sovereign debt crises in Italy and Spain stoked concerns that the global economy is heading for a double-dip recession, analysts said.

Official figures show that the U.S. economy slowed to an annual growth rate of 1.3 percent during the second quarter of the year, falling short of market expectations of 1.7 percent.

The market sentiment was further dragged down by wide expectations that China's July inflation data, which is due to be released on Tuesday, may exceed 6 percent, triggering concerns of a new round of economic tightening measures.

The shipbuilding sector led the fall, with Guangzhou Shipyard International Co., Ltd. down 9.05 percent to close at 19.2 yuan per share, while CSSC Jiangnan Heavy Industry Co., Ltd. down 8.47 percent to 24.64 yuan.

Shares of the textile sector fell 6.52 percent across the board. Shanghai Sanmao Enterprise (Group) Co., Ltd. and Xinjiang Tianshan Wool Tex Stock Co., Ltd. both fell by the 10-percent daily limit to close at 10.15 yuan and 13.14 yuan, respectively.