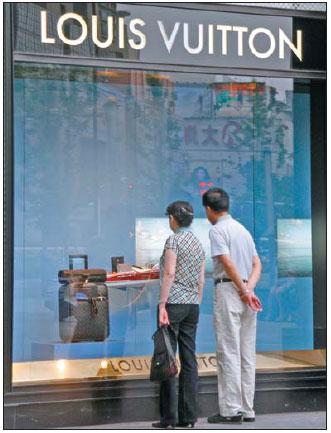 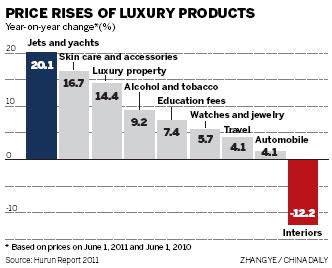 China's wealthiest people have been under a bit of pressure from inflation, with the costs of luxury products and services up 7.73 percent year-on-year as of June, the Hurun Luxury Consumer Price Index (LCPI) released on Monday showed.
The figure was 1.3 percentage points higher than the official consumer price index (CPI), which stood at 6.4 percent in June.
Based on statistics gathered between June 1, 2010, and June 1, 2011, the index unveiled in the Hurun Report measures changes in the prices paid by affluent consumers for a basket of 61 luxury goods and services in nine categories, such as the well-known Chanel and Louis Vuitton brands.
The latest year's rise was, however, smaller than that in the previous 12-month period, which saw an explosive 11.3 percent increase.
The only category that was cheaper this time around was high-end furniture, down by 12.2 percent, mainly due to a fall in the price of redwood, a dark wood popular with wealthy Chinese consumers.
Among the nine surveyed categories, jet and yacht prices recorded the greatest rise, surging 20.1 percent year-on-year, followed by cosmetics and accessories with a 16.7 percent gain.
The British yacht brand Sunseeker now sells its Manhattan 73 model for 31.4 million yuan ($4.87 million) after taxes, freight and all options, up about 24.6 percent year-on-year.
Demand for "super toys" lifted prices in these categories, said Rupert Hoogewerf, chairman and chief researcher of the Hurun Report. "The appreciation of the euro and British pound against the yuan may both have contributed to the price increase," he said.
As the index showed, in the past year, the euro appreciated 11.7 percent against the yuan. For the British pound, the change was 8 percent.
Private jet rental fees took off, too.
"For example, a Beijing-Shanghai return trip on a US-manufactured Gulfstream G550, capable of seating 16 people, now costs 276,500 yuan, up about 15.6 percent," said Hoogewerf.
Luxury alcohol and tobacco prices rose 9.2 percent. And a bottle of 30-year-old vintage Moutai, a Chinese liquor, now costs 20,580 yuan, up 60.8 percent.
Rich Chinese consumers remained thirsty for Bordeaux wines, with a case of six bottles of Chateau Lafite 1982 rising to 445,186 yuan, up about 29.3 percent.
The figures also showed that the Chinese government's measures to cool down the property market have had some impact in the luxury bracket. The price increase slowed from last year's 56.4 percent to 14.4 percent this year.
Although the Rolls-Royce Phantom EWB model cost 4.14 percent more this year, prices of luxury cars were up just 1.5 percent, compared with 3.1 percent last year.
Tang Yuan, 30, runs a shoe company in Wenzhou, Zhejiang province, that makes an average annual profit of about $30 million. He buys luxury cars such as BMWs and Porsches on a yearly basis.
"I have heard that BMW is raising the prices for some of its vehicles. Prices for Porsche vehicles are also said to be going up at the dealer's level," said Tang.
"But it will have no influence on my purchase plans."
Source:China Daily
Weekly review