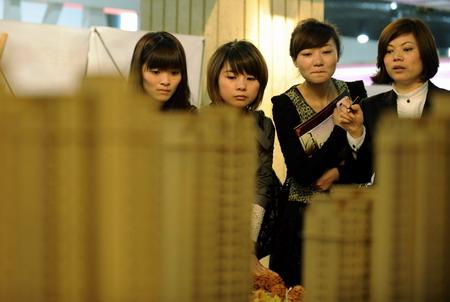 A property expo in Jiaxing, Zhejiang province. Measures to rein in soaring property prices in major cities have driven hot money to smaller cities. (Photo / China Daily)
Property prices in a number of coastal cities are rising faster than those in large cities as investors with deep pockets look to second- and third-tier cities amid tightening measures to cool the market.
In one of the latest cases, a local developer bought a piece of land in Yiwu, Zhejiang province for 226 million yuan ($34.95 million), or 39,545 yuan a square meter (sq m) by gross floor area. The plot, about 1,500 sq m in area, has become the nation's most expensive land for residential use.
Before that sale in Yiwu, a premium piece of land in Wenzhou, Zhejiang, was considered China's most expensive land. The parcel was priced at 37,000 yuan a sq m of gross floor area in November last year, higher than the former record of 35,490 yuan a sq m by gross floor area set by the sale of a piece of land at the Shanghai Expo site in September 2010.
"Recent record land sales made in second- and third-tier cities suggest that the new top prices are somehow shifting to second- and third-tier cities, especially as the major cities of Shanghai and Beijing are short of premium land," Lu Qilin, research director at Shanghai Deovolente Realty, a Shanghai-based real estate agency, told China Daily.
Tightening measures to rein in soaring property prices in major cities have driven hot money to smaller cities. The limited profits and saturated development in metropolitan areas have also encouraged property developers to increase their presence in smaller cities, analysts said.
But high prices have occurred in cities where housing prices can average at just 7,700 yuan a sq m. Analysts have expressed fears that bubbles may be forming in local property markets.
Yiwu is well-known for its small commodity markets. The city's vibrant business environment has helped create a significant group of newly rich Chinese who prefer to buy luxury property in the provincial capital Hangzhou, the commercial hub Shanghai and their hometown.
Spending millions of yuan on an apartment is not a big deal for these people who might do so to flaunt their status, said Zhang Hongwei, research director of Tong Ce Real Estate Co Ltd Shanghai, a Shanghai-based real estate consulting company.
Zhang predicted that the selling price of the residential property built on the land bought at the record price will range from 60,000 to 100,000 yuan a sq m in gross floor area.
Zhang said another piece of land was bid for 3.68 billion yuan in Yiwu at the end of last year and its price of 35,000 yuan a sq m in gross floor area set a record among all the nation's county-level cities.
Song Huiyong, research director at Shanghai Centaline Property Consultants Ltd, told China Daily that he doubted whether the developer will make any profits when the selling price is lower than 50,000 yuan a sq m.
"The property developers pay large sums of money simply to raise market expectations and pave the way for across-the-board price rises," Song said.
Easy money made from the property boom, along with the difficulties of industrial development, has curbed domestic entrepreneurs' zeal to build more factories and production lines.
In an earlier interview with China Daily, Zhou Dewen, head of the Wenzhou SME (small and medium-sized enterprise) Development Association, expressed concerns that the current property spree will grind to a halt.
"In the worst scenario, after the land-bidding spree sidelines industrial production and fuels more record property prices, the bubbles in the housing market will burst and the economic boom will end with a hard landing," Zhou said.
Zhou said he did not want to see a replay of Japan's housing market collapse in China.
"Unlike real industries, property alone cannot 'make' any money," Song said.
Source:China Daily
Weekly review