Close the temple bridge in Taibei Taiwan Taibei of China

Close the temple bridge in Taibei Taiwan Taibei of China 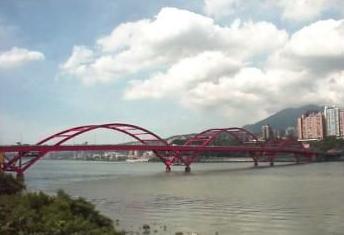 Close and cross the bridge Span in the north of Taiwan Fresh water river ,Link Taibei county township and Taibei market Peitou area of 4 kilometers to imprison and cross, it is that Tamshui river valley nears and gets off a bridge of Haikou most at present too.

Wanted both sides of exchanged fresh water river to depend on the ferryboat hereafter.

1976, the incumbent executive organ of the Republic of China The president s Jiang JingGuo, point out Taiwan Province Highway Administration Bureau studies and closes and crosses area of 4 kilometers to build a very convenient traffic and give consideration to the bridge that the national defence needs again.

The bridge is started building from April of 1980, completed and was open to the traffic on October 31, 1983.

Because close and cross the bridge to get near the fresh water river and appear in Haikou, in order to navigate and need of draining off floodwaters, and given up the reinforcing bar concrete bridge with easy and economical construction and constructed the bridge as the main bridge with the steel in the large span.

Three huge to join difficult problem constructed to become, because of rent to foreign countries, can it holds three huge barges that joins to be expensive and slow action cannot save a critical situation, so construct in contractor s Tang Rong Company and invent tide construction law out. Three huge to join, make, weld at barge separately first, carry on the construction of the pier with time.

After the pier constructs, will bear the weight of the huge barge that push and utilize rising tide dragging to and orientating some hour, the surface of water reduces after ebbing tide, the huge base that joins makes a reservation to the pier naturally, and then withdraw the barge, does not need heavy-duty jack-up apparatus so.

And the majority of main bridge steel products is produced by Chinese iron company.

Imprison low reaches to cross the bridge, the only fresh water river produces Haikou, plan to build 1 -km-long Danjiang bridge, predetermined ones that adopt the large span are oblique to draw the design of bridge, at present still in planning.