Shalu Monastery is located 20 kilometers southeast of Shigatze. It was first built in 1087. It is famous for its sandalwood slips carved with Buddhist scripture and a 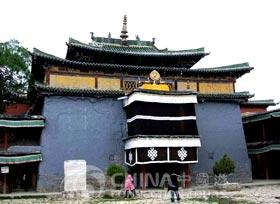 jar used to hold sacred water, in which, it is said, the water does not decrease or deteriorate. The murals in the monastery are an example of excellent workmanship and are one of the rare fine arts in Tibet.

Legend has it that Jigzun Xerab Qoinnyai asked for advice from his teacher Lhodain Dorje Wangqug on the selection of the site for a monastery. The latter hurled his staff, as if shooting an arrow and the staff fell where the site of the monastery was established. The staff fell on the tender leaves of canola plants; thus came the name of Xalhu, meaning new growth of tender leaves.

In 1329, the monastery was destroyed by an earthquake. The emperor of the Yuan Dynasty at the time gave money for the monastery to be rebuilt. In 1333, Master Purdain Renqen Zhuba took charge of the project. He invited many Han Chinese craftsmen from inland provinces and had the monastery rebuilt in a combination of Han and Tibetan architectural styles.

Xalhulhakang, the main building of the monastery, has an arch-like ceiling, glazed tiles and bells hanging from the roof, an imitation of the style of inland Chinese temples. Yet it still retains the characteristics of a Tibetan monastery with red mud-and-stone walls and interconnecting halls. The murals in the halls are rich and lively with a strong Yuan-dynasty flavor.

The images of Buddha are particularly refined and unique. Among the relics housed in the monastery are eight precious Yuan-dynasty proclamations of the Pagba time, religious implements, and Buddhist scriptures on pattra, sacrificial utensils and tangka painting scrolls.

The Shalu Monastery is famous for its four treasures. The first is the printing plate of Buddhist scriptures, made by Abbot Purdain, which is made of 108 blocks of wood. It cannot be taken apart because it is impossible to arrange the blocks in their original positions. Master Purdain wrote many works in his life; the most well-known are Dangyur and the History of Buddhism in 1322.

The second treasure is a jar made of bronze. It is claimed that inside the jar is the clearest water in the world, which is replaced every 12 years. The mouth of the jar is covered with red cloth. Legend says that the water can cure diseases and wash away dirt and filth. 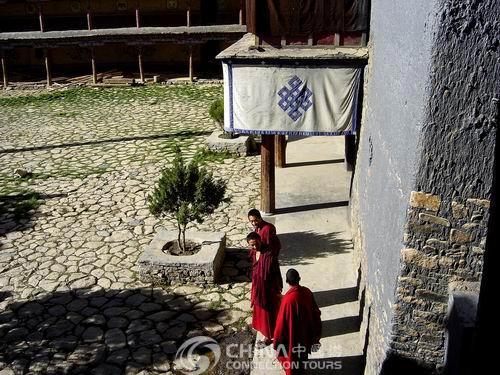 The third is a stone tablet with six characters. It is said that the tablet bore the six characters when it was unearthed during the construction of the monastery. Its edge is engraved with four exquisite small towers.

The fourth is the huge stone basin stone in which the living Buddha, Jigzun Xerab Qoinnyai, who built the monastery and Pandit Gonggar Gyaincain of Sagya, once washed their faces.

The monastery can be reached by taking the public bus from Shigatze to Byangze and walking for another hour after getting off the bus at the half way point.