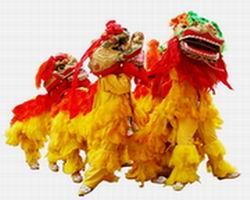 Qiuse (autumn color) is one of the local custom that with strong Lingnan features, Foshan as its famous hometown, colorful activities are held in autumn in celebration of the autumn harvest each year. Furthermore, Foshan is known as one of the four most famous ancient towns in China, a great many of the folk festivals are held within the year.

Qiuse activities are colorful and with strong local folk cultures, that can

be devided into two categories which are performing arts and handicrafts. Performing arts include lantern demonstrations, playing with dragon lanterns, acting out drama stories, lion dance, walking on high stilts and

Lion dance is one of the most interesting activities during the Qiuse festival. Also called Xingshi in Chinese, is a form of local folk art based on martial skills and the imitation of a lion's body movements, and also an entertainment and activity to improve health. The lion is performed mainly by two players, one holding the head while the other holding the back part of the lion.

Follow the master with a dragon pearl, the lion dances to the rhythm of the drums, songs and cymbals. It spread all over Lingnan Region early in the Ming Dynasty. And now, lion dance is so popular locally that every holiday

or joyous occasion witnesses lion dance keenly playful for the sake of celebration, especially during the Spring Festival.