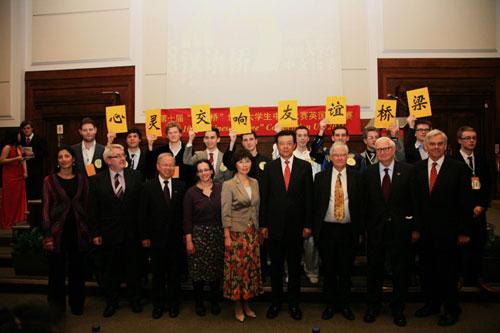 The UK preliminary for the annual "Chinese Bridge" Chinese Proficiency Competition for Foreign College Students was held in London on Saturday, March 19th. Chinese Ambassador Liu Xiaoming (sixth left, front row) and Britain's Director of the Joint International Unit for Education Susannah Simon pose for a picture with the finalists of the UK preliminary. [Photo: CRIENGLISH.com]

By Tu Yun, CRI London Correspondent
The UK preliminary for the annual "Chinese Bridge" Chinese Proficiency Competition for Foreign College Students has been held in London.
Peter Dolby from the University of Edinburgh in Scotland is the winner of the competition.
"I'm planning to go to China next year. I'd like to enrich my knowledge in ancient Chinese literature and study Confucianism."
This year marks the tenth anniversary of the "Chinese Bridge" competition.
Liu Xiaoming is the Chinese Ambassador to the UK.
"This tenth anniversary should be a celebration as the competition has now become a huge success. The aim of the competition is to create a deeper bridge of understanding, using UK as a launching point. Since it started in China in 2002, 100,000 students from more than 20 countries have competed. Now it's something well worth celebrating. Making learning fun is a sure recipe for success. I'm certain that the formula for creating a wider competition will be a winner."
Britain's director of the Joint International Unit for Education, Susannah Simon.
"Language is a gateway to different cultures, histories, and ways of seeing the world. I think what you are doing is going beyond the Mandarin speaking competition. Your attainment of excellence in Mandarin is just really an important bridge between the UK and China. And as far as I'm concerned, you are great ambassadors for Britain and the British people."
Over 20 students from 13 universities around the country participated in this year's competition.
Sponsored by Hanban, Chinese Bridge is a competition where foreign students showcase their Chinese language proficiency. It consists of an oral presentation, random questions regarding Chinese culture, and a talent show. Students who win the preliminary rounds in their countries will qualify for the finals held in China. They will also receive scholarships to further their academic pursuits in China.