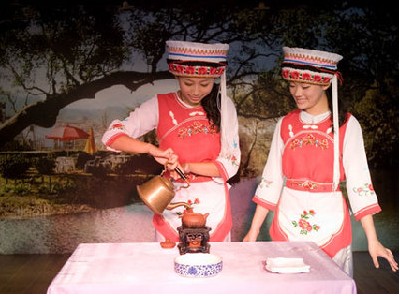 The Bai spiritual tradition consists of a set of syncretic beliefs, imbued with a strong local flavor, represented by the Benzhu or Local Lords/Gods tradition.

Most of the Bai have believed in Buddhism since the 7th century. In fact, Guanyin, the Buddhist bodhisattva of mercy, plays an important role in the oldest myths of the Bai. Chinese influence is also manifest in the importance that Daoism and Confucianism have among them. It is very common to find Buddhist, Daoist, Confucian and Benzhu temples or shrines within a single Bai village, or even within a single temple complex.

This last tradition, the Benzhu (translated as the Local Lords/Gods) religion is the most characteristic of the Bai people. It coexists with the Chinese religions, but its importance in the collective life of the people is much larger and unique to the Bai.

The Benzhu or Local Lords/Gods religion is by far the most extensive spiritual tradition among the Bai and is one of their most unique characteristics. A fascinating amalgamation of history, fable and devotion, each village has its own god, who receives the worship of the people, and who protects them. In general these gods are historical heroes, warriors, sages or popular leaders, deified. Thus we refer to Benzhu as the Local Lords/Gods tradition. They are both. It is believed that they are able to protect crops and livestock, to avert illness, and to bring peace and prosperity to the village. Because of this they are honored before any important event. 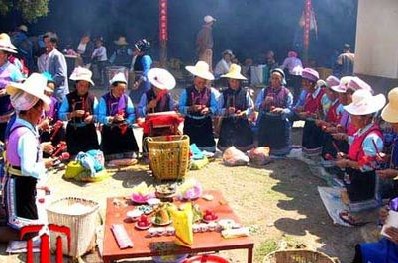 he Benzhu religion preserves the memory of numerous legends and mythological characters associated with these legends, as well as what were probably historical figures. In every village around Erhai Lake the Bai people have developed a singular mythology around their own Local Lord, a mythology completely different from that of neighboring villages. This is a system similar to that of the City Gods Temples (chenghuangmiao in Chinese), common to every Chinese city until 1949 and maybe, in turn, similar to the function served by the Buddhist lohans (skt. avatar), the semi-enlightened beings portrayed in statues that adorn the walls of many Chinese Buddhist temples.