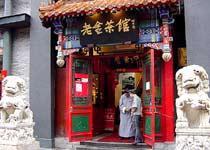 Lao She tea house is a characteristic destination. The first floor performs the hall, there are tea house and restaurant on the second floor, can taste the genuine unique Beijing flavor snack. Buy a cup of Longjing tea, several dishes of pastry, and then two hours see the performance, here nearly includes all the quintessence of Chinese culture, the atmosphere is very good too, the interdynamic above and below the stage can t be realized while sitting at home watching TV. Here is the place where the foreigners like patronizing too, visitors can often experience the corrupt life like the little landlord.
The intersection of performance and hall of the first floor build on 1994, here perform capital every day one comprehensive to perform alone, from Beijing opera to cross-talk, from single string to two-man act, from the intersection of Beijing and until Sichuan opera assume a hostile attitude and from the acrobatics and then to the exciting time show story-telling in the form of ballads sung with musical accompaniment, here is the stage where a folk art assembled.
The tea institute of inning lies in the second floor of Lao She tea house, it is a tea art house which imitates the old form of Beijing Chinese courtyard house. Also only one is built in the Chinese courtyard house the building. It is and plain in one suit in the South to collect the North seriously in the building of the tea institute of inning, incorporate some present elements while keeping old original appearance of principal rooms of the Chinese courtyard house of Beijing.
The precious floor of the product in the second floor is as the dominant hue with red golden color, royal building elements such as the Chinese-style door leaf of the superelevation,etc. are made ornamentally, build emperor s atmosphere in the court palace garden. Here is well-known for tea meals of the palace, recommend the cooked food: Noodles served with fried bean sauce, Longjing tea shelled shrimp, pea flour cake.