Lying at the city center and called Gu Gong in Chinese, it was the imperial palace for twenty-four emperors during the Ming and Qing dynasties. It was first built throughout 14 years during the reign of Emperor Chengzu  in the Ming Dynasty (1368-1644). Ancient Chinese Astronomers believed that the Purple Star (Polaris) was in the center of heaven and the Heavenly Emperor lived in the Purple Palace. The Palace for the emperor on earth was so called the Purple City. It was forbidden to enter without special permission of the empeor. Hence its name 'The Purple Forbidden City', usually 'The Forbidden City'.

Now known as the Palace Museum, it is to the north of Tiananmen Square. Rectangular in shape, it is the world's largest palace complex and covers 74 hectares. Surrounded by a 52-meter-wide moat and a 10-meter-high wall are more than 8,700 rooms. The wall has a gate on each side. Opposite the Tiananmen Gate, to the north is the Gate of Divine Might (Shenwumen), which faces Jingshan Park. The distance between these two gates is 960 meters, while the distance between the east and west gates is 750 meters. There are unique and delicately structured towers on each of the four corners of the curtain wall. These afford views over both the palace and the city outside.

It is divided into two parts. The southern section, or the Outer Court was where the emperor exercised his supreme power over the nation. The northern section, or the Inner Court was where he lived with his royal family. Until 1924 when the last emperor of China was driven from the Inner Court, fourteen emperors of the Ming dynasty and ten emperors of the Qing dynasty had reigned here. Having been the imperial palace for some five centuries, it houses numerous rare treasures and curiosities. Listed by UNESCO as a World Cultural Heritage Site in 1987, the Palace Museum is now one of the most popular tourist attractions world-wide. 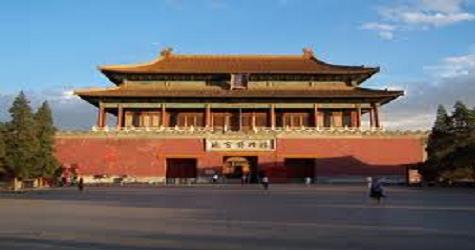 Construction of the palace complex began in 1407, the 5th year of the Yongle reign of the third emperor (Emperor Chengzu, Zhu Di) of the Ming dynasty. It was completed fourteen years later in 1420, and then the capital city was moved from Nanjing to Beijing the next year. It was said that a million workers including one hundred thousand artisans were driven into the  long-term hard labor. Stone needed was quarried from Fangshan District. It was said a well was dug every fifty meters along the road in order to pour water onto the road in winter to slide huge stones on ice into the city. Huge amounts of timber and other materials were freighted from faraway provinces.

Ancient Chinese people displayed their very considerable skills in building it. Take the grand red city wall for example. It has an 8.6 meters wide base reducing to 6.66 meters wide at the top. The angular shape of the wall totally frustrates attempts to climb it. The bricks were made from white lime and glutinous rice while the cement is made from glutinous rice and egg whites. These incredible materials make the wall extraordinarily strong.

Since yellow is the symbol of the royal family, it is the dominant color in it. Roofs are built with yellow glazed tiles; decorations in the palace are painted yellow; even the bricks on the ground are made yellow by a special process. However, there is one exception. Wenyuange, the royal library, has a black roof. The reason is that it was believed black represented water then and could extinguish fire.

Nowadays, it is open to tourists from home and abroad. Splendid painted decoration on these royal architectural wonders, the grand and deluxe halls, with their surprisingly magnificent treasures will certainly satisfy 'modern civilians'.