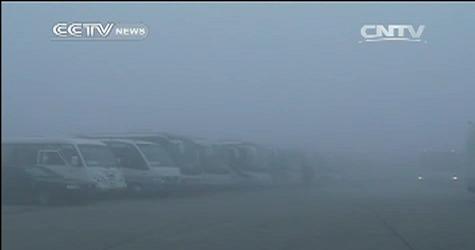 Heavy smog and poor visibility disrupted travel, as people made their way home to Southwest China.

Roads were closed across Sichuan early Friday morning, as visibility was reduced to less than 100 meters.

A large number of vehicles were held up at toll-gates in Zigong, Neijiang and Nanchong.

"I have been stranded for 3 hours. I arrived here at 9 clock in the morning. I know it is the smog that closed the highways. I understand. But my plan has been totally affected," a gentleman heading home said.

More than 10 passenger routes were affected, stranding many people at the bus station.

"If passengers are willing to wait, then they can stay here until the expressways reopen. If they can not, we will refund full amount of the money to them," Zhong Ming, Deputy Director of Neijiang Highway Bus Station, says.

Sichuan and its neighboring municipality Chongqing closed the inter-provincial expressway for nine hours, from around 3 clock in the morning.

Hundreds of vehicles had to wait until the expressway reopened at 12.

"We have been stranded here for more than an hour. We are heading to Sichuan and Chongqing. We have to wait until the police allow us to pass through," a gentleman heading home said.

Visibility in most of the areas was less than 50 meters.