The postal museum of Shanghai travels Shanghai of China

The postal museum of Shanghai travels Shanghai of China 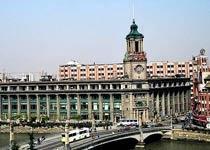 The postal museum of Shanghai lies in the north road No. 276 of Suzhou to the ramp of a bridge of north Sichuan Road bridge [1 ], is originally known as the general post office of Shanghai. The general post office of Shanghai is a masterpiece of European eclecticism architecture, the association settled the foreign firm to design in 1922, wrote the construction firm and constructed hard and abundantly, the massif (No. 1716 North Road of Sichuan of today) in collecting originally beautifully Had and built, completed in November of 1924. Cover an area of more than 6400 square meters, the building is with the whole area of 25294 square meters, the building height is 51.16 meters, total fabrication cost is 3,200,000 silver dollar. Frame structure of steel-framed concrete. The main building is four storeys high, the corner tower building is real and eight storeys high, there are one storeyed basements besides. Elevation adopts Britain s classical tactics, but main elevation encloses in order to be well versed in the trilaminar column type of Corinth and lists the ancient Rome s architectural style that the column supports, reflect postal fairness and solemnity, the bell tower is Italy s Baroco style in the 17th century, have reflected refined style and grand imposing manner. Two kinds of different architectural styles are combined perfectly, has classified as one of ten major buildings Shanghai at that time. The tower building is a Baroque type. Wall to the the intersection of particulate and the intersection of granitic plaster and powder, face day the intersection of Tong and way side the red brick wall of plane, the top original statue group, for the messenger, wear caps, the hand-operated is taken, excellent in the centre in the south, the foot born the wings, it is a goddess from side to side, writing and letter, there is the earth at the edge; In in the north is Cupid, holds plane and letter box, the left statue holds the locomotive engine, these statues are in the Cultural Revolution China is destroyed. The whole building is grand. The second floor that enters more than 1200 square meters from rotating stair on both sides opens in the hall, can hold 6 basketball teams and perform the basketball match at the same time. Have at that time The Far East first drawing room Laudatory title.
Come into the postal museum of Shanghai, the ones that leapt to the eye at first are several artificial mail means of transport displayed in front yard in the ground floor: In 1909, the general post office of Shanghai was used for transporting the carriage replica of the mail; In 1917, Shanghai posted two car models used for transporting the mail of administration bureau affairs; Hang in top, to set sail, use for, take Shanghai, the intersection of Nanjing and airplane model of mail. Come to the second floor in the museum, the abundant picture historical data is telling people about the close relation of postal history and national national the rise and decline: the guest posts The office is that the Western imperialist powers infringe China s sovereignty, the postal organization run in China without authorization.
Britain set up the post office in Shanghai initially in 1861. China joined Universal Postal Union in 1914, Shanghai was determined the international mail as to exchange the office. The centre of mail handling of Pudong of Shanghai has already become one of the 7 first class postal pivots China Post nowadays, per person in Shanghai has letters quantity to reach 51.5 every year, rank the head of China. The most noticeable one is in the postal museum Stamp and stamp collecting hall Jean that sets up inside posts the hall and faces the exhibition area. Value highly treasure of guarding the building that post in the hall the intersection of philatelist and horse let whom the whole gentleman donate give country 1956 red to leave a round cancellation of the intersection of the Eight Diagrams and stamp of postmarks on small character as push away, this ticket only finds one at present, it is a fatherless product in the world. The ones that valued highly and posted exhibiting in the hall are Da Long s stamp, little dragon stamp, the Chinese people s revolution wartime s some precious philatelic products and design draft,etc. of Qing Dynasty.