Chinese military college as a mini-UN

Chinese military college as a mini-UN 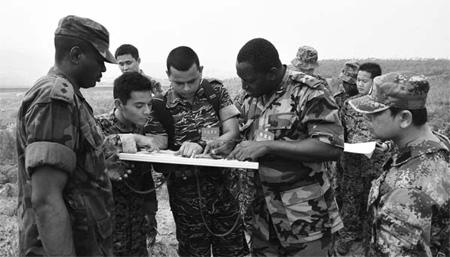 At intervals the officers stop taking notes to make eye contact with their lecturer as the bilingual Power Point flashes on the screen at the Nanjing Army Command College in Jiangsu province.

"The classroom is like a mini-UN, and a colorful world map unfolds in my mind whenever I stand before the class," Wan told China Daily.

As an English lecturer and teacher of military arts, Wan has been training foreign military students since he graduated from the University of International Relations in Beijing in 1985.

"My first degree was English language, so military arts was a strange field for me at the beginning," he recalled.

"It took years for me to learn how to play the different roles as teacher, translator and military diplomat," he said.

"Some foreign army officials used to study in America and European countries, so winning their respect requires a Chinese teacher and interpreter who is a living dictionary of world military skills," he said.

Wan is among a special group of Chinese language specialists who serve the Chinese army and help train foreign officers in China.

Nanjing Army Command College, with a history of 71 years, is designed like a Chinese garden, and is located near the national high-tech zone in Nanjing.

It was among the first group of China's military departments to open to foreigners. It has trained nearly 4,000 foreign officers at the intermediate or senior level from more than 100 countries over the past 54 years.

The foreign students mainly study "Chinese military thinking" and "courses of command, administration and art of leadership" during their nearly one year here, said Wan.

"The foreign students can practice monitoring battle systems on our computer. Similar systems are off limits to foreigners in most countries around the world," said Liang Yi, the vice-chief of the tactics teaching and research department.

"It is an attractive and competitive opportunity to study here for our army, and I would like to learn the different military arts between western and eastern countries," said Major Abu Bakar Shahbaz from Pakistan.

Shahbaz studied in the United States Army Armor School in Kentucky from 2003 to 2004.

As a third generation military man, he came to Nanjing Army Command College last September with his wife and child.

"I am very interested in Mao Zedong's military philosophy and the military science of Sun Tzu, the classical Chinese strategist," he said.

Dovletgeldi Annamator, a captain from Turkmenistan with a background in psychology, said he looked forward to the chance to communicate with Chinese soldiers during his 10 months of study, which end in July this year.

"I found the modern military arts have no big differences, but they are represented by different modes of thinking in different countries," he said.

"The spare time here is not boring, and it is great to have a cup of coffee after having a football game with commanders from other countries," he said.

"The Chinese interpreter and officers are nice, and they can be trusted whenever I have a difficulty," he said.

Deng Xiumei, the Russian linguist of Nanjing Army Command College, had the beautiful nickname "plum flower" given to her by foreign students, an English translation of her given name, used as a metaphor to symbolize resilience and perseverance in the face of adversity.

Every term, freshmen come to Deng for help, having been recommended by former students who passed on her phone number to them.

"Foreign students have language difficulties in a strange country, and it is my responsibility to try my best to make them feel at home," Deng said.

(Li Shoulin and Pan Daqing contributed to this story.)