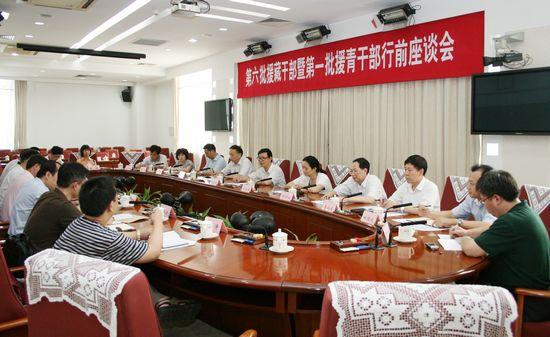 On July 23, the Ministry of Agriculture (MOA) held a meeting with the sixth group of Aid-Tibet cadres and the first group of Aid-Qinghai cadres before their departure. Liang Tiangeng, member of CPC leading group and Director-General of the Department of Human Resources, presided at the meeting and delivered a speech.

Liang Tiangeng said that in fulfilling the glorious and significant task of aiding Tibet and Qinghai, we had to conform to the spirit of the Central Committee, boost the sense of responsibility and mission, and carry out the aid work in a down-to-earth way, with a strong political awareness and from the perspective of overall interests, in order to make positive contribution to economic growth and social stability in Tibet and Qinghai.

At the meeting, Liu Beihua, Deputy Director-General of the Department of Development and Planning, listed the accomplishments of MOA in Aid-Tibet work and introduced the working plans and measures for the following agricultural aids to Tibet and Qinghai. The representative of cadres sent to aid Tibet and Qinghai expressed confidence and resolve in his speech to shoulder the task and fulfill the mission successfully. Principals of the departments the cadres come from also attended the meeting.

In accordance with the unified arrangement of the Organization Department of CPC Central Committee, MOA Aid-Tibet and Aid-Qinghai cadres will depart on July 31 for three-year assistance program.