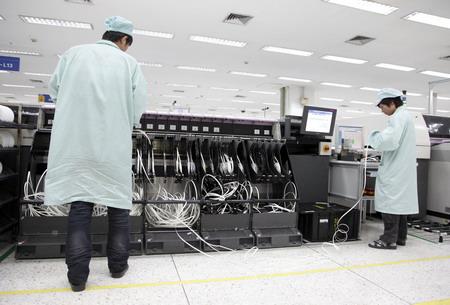 Employees work on a communications equipment assembly line at a ZTE Corp factory in Shenzhen, Guangdong province. Skilled blue-collar workers are vitally important to Shenzhen's development, but the high cost of housing prevents many from staying in the city. [Bloomberg]

SHENZHEN, Guangdong province - Over one month after the Chinese government launched property tightening policies, the average housing price in Shenzhen has remained unchanged though the sales volume fell sharply. In the meantime, analysts warned that high housing prices would discourage highly skilled staff from working in Shenzhen.

New housing sales fell 42.9 percent in May compared with April, with 1,386 new apartments being sold last month, and the average housing price was 20,238 yuan ($2,961) per square meter, only 329 yuan lower than April, according to the latest figures released by the Urban Planning, Land and Resources Commission of Shenzhen.

In Shenzhen's second-hand housing market, the transaction volume shrank by as much as 90 percent in the month since the tough government policies took effect, according to a report by Centaline Property Agency, the biggest property agency in Shenzhen.

"Potential house buyers believe the government is currently taking strict measures to cool down the real estate market while home owners are reluctant to sell at the moment. Both sides have adopted a wait-and-see attitude," said Li Yaozhi, general manager of Shenzhen Centaline Property Agency.

"The government's property tightening measures have had a great impact on the housing transactions of both mainland and Hong Kong residents," he added.

However, analysts warned that such sustained high residential house prices would discourage skilled staff from working in Shenzhen, and thus hamper economic development.

Wang Lian, a researcher at the Guangdong-based Pearl River Delta Research Center, said soaring housing prices tend to be a stumbling block for Shenzhen to attract and retain skilled employees.

"Skilled blue-collar workers are of great importance for Shenzhen's industrial development, but they may have difficulties working in Shenzhen for a long time because the majority of them can't afford to buy a house."

China (Shenzhen) "City of Design" Creative Design Industrial Estate, an important project in Shenzhen's 11th Five-Year program (2006-10), currently has some 1,000 designers from all over the world, but experts estimate that more than 50 percent of the designers involved rent a house in Shenzhen and won't even consider buying a house.

A large proportion of those designers are now in their 30s, therefore, housing is the heaviest financial burden for them. As a result, most of them had to move to other cities with cheaper housing prices.