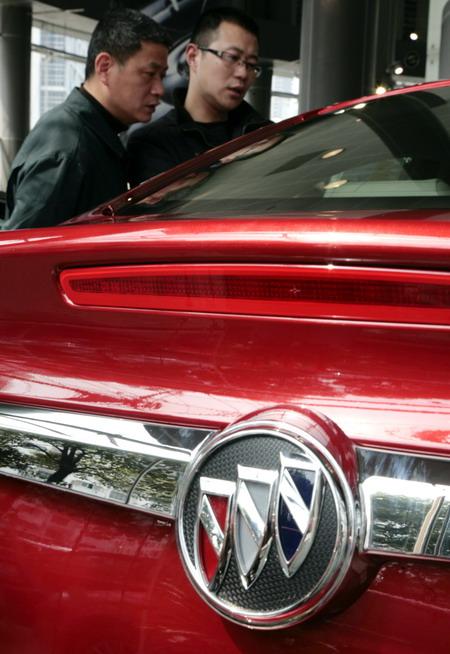 Visitors to a General Motors(GM) Co dealership inspect a Buick vehicle in Shanghai.[Agencies]

BEIJING - General Motors Co's China sales rose to a record in March, surpassing its US deliveries for a third straight month and cementing the country's importance as the world's largest auto market.

GM, the biggest foreign automaker in China, boosted sales 68 percent to 230,048 vehicles last month, it said in a statement on Friday. That compares with a 33 percent gain for Japan's Toyota Motor Corp and a 47 percent jump by South Korea's Hyundai Motor Co. GM raised US sales 21 percent in March to 188,546.

Detroit-based GM aims to increase its China sales to 2 million vehicles this year from 1.83 million in 2009, when government subsidies helped boost the nation's auto demand 46 percent from a year earlier, surpassing the US for the first time. Industrywide sales growth in China is forecast to slow this year, even as carmakers raise production capacity.

China last year halved the sales tax on new vehicles to 5 percent and set aside 5 billion yuan ($733 million) in subsidies for customers who replace old models, helping insulate the country from slumping global demand. The government on Dec 10 announced plans to scale back the measures, including raising the tax on new vehicles with engines of 1.6 liters or smaller to 7.5 percent.

"There is continuous demand for cars in China," said Qin Xuwen, an analyst at Orient Securities Co in Shanghai. "Sales won't be a concern, although carmakers may be forced to cut prices given rising capacity."

GM's figures include sales of 129,489 vehicles at its minivan-making venture SAIC-GM-Wuling Automotive Co, an increase of 43 percent. Sales at Shanghai General Motors Co, another unit, increased 89 percent to 86,967.

March was the 15th consecutive month that GM reported record sales, the company said in a statement. Its first-quarter tally rose 71 percent from a year earlier to 623,546 units.

Kevin Wale, president of GM's China business, said in January the carmaker aims to sell 2 million vehicles in the country this year as it introduces more than 10 new models. Industrywide sales in the nation may total as many as 15 million vehicles, he said at the time.

Volkswagen AG, Ford Motor Co and other automakers have not yet released their March sales numbers. The China Association of Automobile Manufacturers is scheduled to release sales figures later in the month.

In the US, industrywide sales rebounded 24 percent last month to 1.07 million. Toyota raised US deliveries 41 percent as it offered no-interest loans and discounted leases to rekindle demand after recalling more than 8 million vehicles.