China's first national private equity "fund of funds", which invests in other funds, started operating on Tuesday, and one of its primary aims is to support the overseas expansion of Chinese enterprises.

Set up by China Development Bank (CDB) and Suzhou Venture Group, the Suzhou-based Guochuang Fund of Funds has 60 billion yuan ($9 billion) under management.

Overall, the fund will focus on strategic emerging industries that have obtained key support from the government. 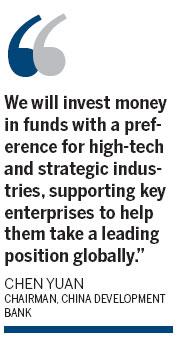 The private equity fund will focus on relatively well-developed industries and enterprises, including mid- to high-end manufacturers and financial institutions.

Meanwhile, the venture-capital fund will pay attention to emerging industries and growing small- and medium-sized enterprises, including those in the information technology, Internet, consumer and service sectors.

Over the past few years an increasing number of Chinese enterprises have adopted a "go-out" strategy to invest overseas in sectors such as oil, gas, mining and metals. By the end of 2009, China's accumulated direct overseas investment was $245 billion, ranking it 15th globally.

"We will invest money in funds with a preference for high-tech and strategic industries, supporting key enterprises to help them take a leading position globally," said Chen Yuan, CDB chairman.

He said the 60 billion yuan could play a leverage role to drive more capital flow into the target industries.

The Guochuang Fund of Funds is currently raised domestically and aimed at domestic markets, but as it develops, foreign capital could be attracted into the pool, said Cui Weiwei, deputy general manager of the fund department of CDB.

She added that a timetable for the fund to open up to foreign investors is not yet available.

Chen told China Daily that the new fund will initially focus on the domestic market, but it will probably invest overseas in the future.