OK, here's a question: If most rooms are square, why are most light bulbs round or oblong? How can you direct light better so that less is wasted?

LED technology maker Illumitex explodes traditional LED lighting design principles in its quest to differentiate from other companies in the burgeoning LED lighting space. The company's first product, the Aduro line launched in April, dispenses with the reflectors and other secondary optics that are usually needed to help direct LED lighting in the most uniform manner possible. 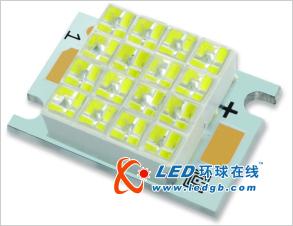 What Illumitex has achieved is a fundamental breakthrough in delivering the most usable lumens to the task surface, thus providing unrivaled lighting system efficiency. We have reinvented the basic die and package structure to create the industry's most optically advanced LED. Our technology allows us to deliver perfectly uniform light exactly where the customer wants it.

When I spoke with Thomas a few weeks ago, he said there are dozens of potential applications for his company's technology - especially in locations that need directed lighting such as a desk or an accent wall. One focus for the company will be billboards, because Illumitex LEDs can cast light across an entire billboard length while using much smaller ballasts, according to Thomas. Another green benefit: The Illumitex technology doesn't contain any Mercury.

Thomas says markets outside the United States have been moving quickly to embrace LED technology. The company's technology already is installed in an apartment complex in Singapore; China will also be another fast-moving market.