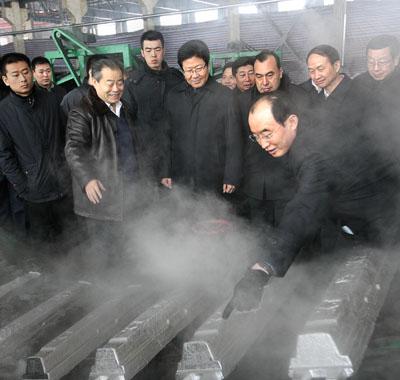 Xinfa Group launched thermal power project in the 6th Agricultural Division XJPCC in June, 2009. Now, a modern thermal power base has seen initial form after only 9 months. Till now, 12.3 billion yuan has been invested in the project. An aluminum plant has been put into production, while carbon plant, semi coke plant and asphalt plant have been in trial operation.

Zhang Chunxian hopes that enterprises can dominate advanced technology, and attach importance to technical innovation to play the leading role of technology in China and even the world.

Hearing the work report of CPC Committee of Wujiaqu City, Zhang Chunxian said,at the new period, XJPCC and Wujiaqu City of the 6th Agricultural Division XJPCC should take lead to implement the pioneering spirit, give priority to people's livelihood and push forward the new type industrialization, agro-modernization and new-type urbanization.

They should stick to the leading role of modern culture, encourage the cadres and masses to unite together and lay a solid foundation for Xinjiang's leapfrog development and lasting stability.