Indeed, Chinese cotton spinning industry was still posting bullish growth during the first three quarters of 2010, though a number of uncertainties linger on. Since 2010, cotton prices have been increasing at an unprecedented level in China. Cotton spinning mills faced a challenging environment in high purchasing prices where they have to pass higher material costs on to higher yarn prices. Besides, yuan appreciation, Currency War and "Trade War" could may pull down the performance of the industry in Q4.

China's cotton spinning industry saw a sharp increase in the output in the first eight months this year, according to data collected from statistics-worthy Chinese textile enterprises surveyed by National Bureau of Statistics of China. Looking further, from January to August, yarn output of the industry reached 17.499 million tons, up 16.23 per cent from the previous year's period; fabric 41.14 billion metres, up 17.43% year-on-year. 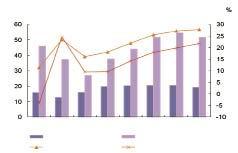 Looking further, the exports value of cotton yarn amounted to $1.57 billion in the first eight months of 2010, up 28.83 per cent y/y. The average unit value registered a growth of 17.68 percent y/y. Cotton prices have been increasing at an unprecedented level in China. Prices have been going up internationally as well. Cotton spinning mills faced a challenging environment in high purchasing prices where they have to pass high material costs on to higher yarn prices.

For exports, China Hongkong and ASEAN have been the Mainland's number one cotton textile and apparel export destination. Export to ASEAN was leading the 1st , with a growth rate of 41.88%. The trade rise was due to their stimulus packages which raised their global purchasing power as well as and China's Free Trade Agreement with ASEAN.The China-ASEAN Free Trade Area, the world's largest free trade area of developing countries, covers a population of 1.9 billion and accounts for about 4.5 trillion U.S. dollars in trade volume. China-ASEAN free trade agreement resulted in huge growth in bilateral trade between China and ASEAN, especially since the demand from the United States and Europe has plummeted during the global financial crisis.

For imports, China's cotton textile and apparel imports from Hongkong, ASEAN, the United States, the EU and Japan accounted only 27.9% of China s total, which shows China has created the new multiple-source environment.