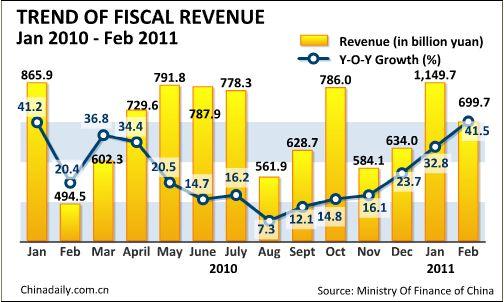 Of the February fiscal revenue, the central government collected 375.53 billion yuan, up 50.8 percent from the previous year, while local governments gathered 324.17 billion yuan, the MOF said in a statement on its website.

The February took the January-February figure to 1.85 trillion yuan, up 36 percent from last year' same period.

The MOF attributed the strong fiscal revenue growth to big increases in imports-related taxes, as well as rapid economic growth and price hikes.

The MOF forecast the strong growth rate of fiscal revenue to slow in the coming months due to the government's tightening measures.

Fiscal revenue in China include taxes as well as administrative fees and other government income, such as fines and income from State-owned assets.