US credit rating agency under fire

US credit rating agency under fire

After the debt ceiling debate, the American people are trying to understand how the downgrading of America's AAA credit rating by Standard and Poor's (S&P) caused another "Black Monday" on the stock market. Is this downgrade a reliable evaluation? What does an "AA+" rating mean for the American economy? 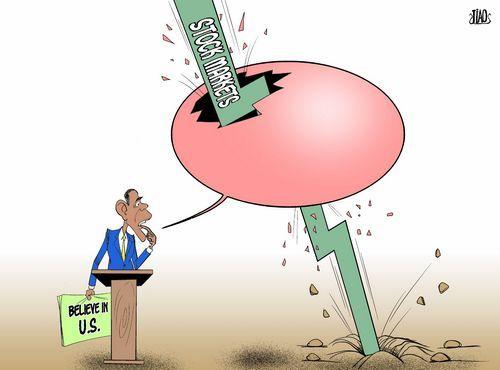 
The downgrading of the U.S. credit rating has revealed the fragility of the current financial market and has triggered several stock market plunges in just two days. As a result, a wide range of voices from the US government, Congress and the financial industry have begun to question the quality of credit ratings in general. Some have even argued that the S&P's irresponsible credit rating has directly caused the current market deterioration.

Amazingly, the people who conduct the credit ratings are still relatively unknown to public. Agencies like S&P operate in a clandestine manner. The lack of transparency in the procedure itself makes people question the reliability and creditability of the rating agencies themselves.

In a statement, U.S. Treasury Secretary Tim Geithner recently said S&P had shown "terrible judgment" and a "stunning lack of knowledge" about basic U.S. fiscal budget math. S&P appears to be downgrading itself.

In general, a credit rating agency should review two factors in order to determine the rating: the country's economic and political situation. The economic part can be easily managed as long as the methodology is right and the database is reliable. But the political part is much more delicate.

In the US case, the downgrade is most likely due to political reasons. Economically, the US government is still able to borrow money easily to pay off its bondholders, because nations, particularly American's big creditors such as China, are not likely to stop buying U.S. bonds. Even during the most recent financial crisis, the US continued to be the safest destination for foreign investments.

Theoretically, the downgrade from AAA to AA+ does not indicate outright danger for investors. AA+ indicates a bit higher risk than AAA and means that the US is a very strong borrower.

Questions remain about how the American political system is rated. Furthermore, what role does the self-interest of credit rating agencies play in the ratings?

It has become quite clear that the current rating system does not properly reflect the financial stability of the borrowers. Credit rating agencies need to rate themselves first, before they rate others.

The author is a columnist with China.org.cn. For more information please visit: http://www.china.org.cn/opinion/zhanglijuan.htm